This Is My Guess about Removing Ichabod

The lame excuse offered by Google for yeeting Ichabod falls flat when the facts are applied. All my blogs have plenty of links, because I find them useful in promoting good material and in indicting false teachers.
Views soared on all posts about the KJV. It was not unusual to have 7,000 views over two days. A normal average was more like 2,000, which is still a lot.
The ESV-RSV-NIV trio has to fight among themselves for the 40% of the market left after the KJV/NKJV combo takes 60%. Each one of those laughable and fraudulent new paraphrases only has a fraction of the entire market, and they spend big money to leverage sales at Walmart, bookstores, and synodical publishing houses. I do not want to say "kickback" because kickbacks are illegal and unethical.
The ELCA-LCMS-WELS-ELS-CLC-ELDONUTs contain an elderly population with money but an understandable preference for the KJV. They should fly in a marketing expert from Fuller to explain that the KJV is a felt need, so why not make people happy and content with the best Bible text and translation?
The problem is that the false doctrine of the apostates is challenged by the KJV but embraced by the ESV-RSV-NIV (two of them - in red - owned by the Left-wing National Council of Churches - which is also known for the sin of inhospitality, if you know Genesis).
The synods are experiencing a landslide; everything flows downward. Why not whack the source that questions their fondness for horrible translations and laughable "eclectic texts) that do not agree with each other, though they are all modern, scientific, and beyond your puny understanding? 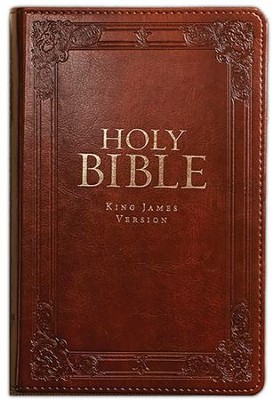 Posted by Ichabod the Glory Has Departed at 4:22 PM

Email ThisBlogThis!Share to TwitterShare to FacebookShare to Pinterest
Labels: KJV, The Bible Book The KJV Reborn for Those Who Love the Word of God