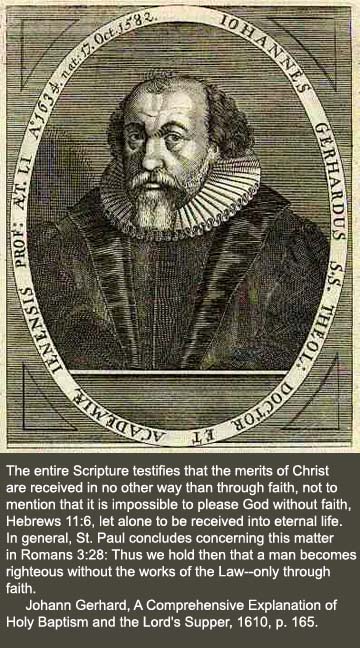 Posted on March 10, 2013 by Rev. Rydecki
Romans 4:22 – 5:2   22 And therefore “it was accounted to him for righteousness.” 23Now it was not written for his sake alone that it was imputed to him, 24 but also for us. It shall be imputed to us who believe in Him who raised up Jesus our Lord from the dead, 25who was delivered up because of our offenses, and was raised because of our justification. 5 Therefore, having been justified by faith, we have peace with God through our Lord Jesus Christ, 2 through whom also we have access by faith into this grace in which we stand, and rejoice in hope of the glory of God.
One or two sentences are often quoted from Gerhard on Romans 4:25 by those who think they have found in him the 17th Century champion for universal justification.  I’ll deal with those sentences another time.  For now, I was digging through the writings of Gerhard and found a whole pamphlet (some 26 pages) dedicated entirely to this verse.  Nowhere does he teach universal justification.  What he teaches most clearly is the universal satisfactionand atonement that Christ has made for sins, and the universal acquisition by Christ of righteousness and life.  This is far from a declaration that “all men are righteous in God’s sight,” which the Scriptures never teach, since it is through faith alone that sinners are clothed in the righteousness of Christ and thus justified before God.
Some modern theologians even consider the resurrection of Christ to be the proof that God has already justified all people. In other words, they treat Christ’s resurrection as theresult of the justification of all men that (they claim) already took place prior to His resurrection and caused His resurrection.  This, too, is foreign to the text of Romans 4:22 – 5:2, and foreign to the teaching of Gerhard, who teaches in this pamphlet that the resurrection of Christ is the final cause of our justification.  A “final cause” is the purpose for something.  The purpose for Christ’s resurrection, according to Gerhard, was to provide a “clear proof and manifestation” that Christ…
…is the Savior; that payment for our sins has now been made and perfect redemption accomplished; and that salvation and righteousness have been prepared (see Rom. 8:34, 1 Cor. 15:17, etc.). The resurrection of Christ was indeed necessary, both on account of the clear proof and on account of the application of our justification. For if Christ had not been raised, then death would not have been conquered; rather, He would have been conquered by death. In that case, He would not have merited for us life and righteousness. And even if He had merited them, He still would not be able to confer and apply them if He had remained in death. Having stated these things briefly, there emerges this sense of the passage:
PARAPHRASE:
Christ Jesus our Lord subjected Himself to death for our sake and was delivered over to it in order that He might make satisfaction for the sins of the whole world and atone for them.  He was, however, raised from the dead in order that He might testify and demonstrate that, with death now fully defeated and destroyed, righteousness and life have been provided for men; and that He might apply these things to those who believe in Him.
Yes, righteousness and life have, indeed, been merited and provided for all men by Christ. But it is the application of the righteousness of Christ that constitutes the justification of the sinner. Just as men who are dead in sin are only brought to life through faith in Christ (Eph. 2:8), so also men who are unrighteous before God are only declared righteous by God through faith in Christ.


'via Blog this'
Posted by Ichabod the Glory Has Departed at 2:07 PM