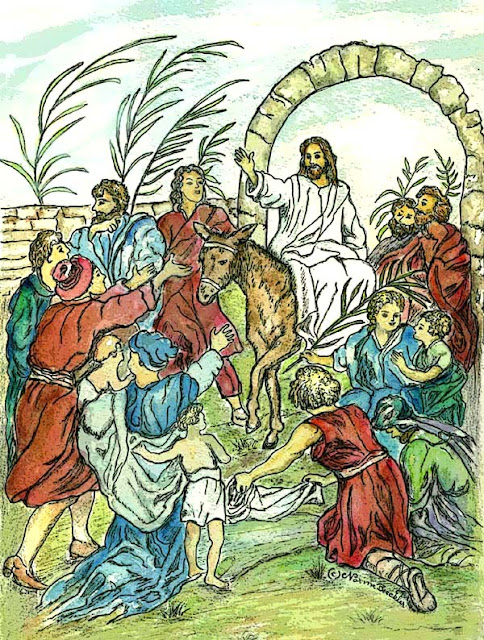 
The Hymn #160 All Glory, Laud 4:49
The Confession of Sins
The Absolution
The Introit p. 16
The Gloria Patri
The Kyrie p. 17
The Gloria in Excelsis
The Salutation and Collect p. 19
The Epistle and Gradual
The Gospel
Glory be to Thee, O Lord!
Praise be to Thee, O Christ!
The Nicene Creed p. 22
The Sermon Hymn # 162 Ride On 4:80

KJV Philippians 2:5 Let this mind be in you, which was also in Christ Jesus: 6 Who, being in the form of God, thought it not robbery to be equal with God: 7 But made himself of no reputation, and took upon him the form of a servant, and was made in the likeness of men: 8 And being found in fashion as a man, he humbled himself, and became obedient unto death, even the death of the cross. 9 Wherefore God also hath highly exalted him, and given him a name which is above every name: 10 That at the name of Jesus every knee should bow, of things in heaven, and things in earth, and things under the earth; 11 And that every tongue should confess that Jesus Christ is Lord, to the glory of God the Father.

Palm Sunday
Almighty and everlasting God, who hast caused Thy beloved Son to take our nature upon Himself, that He might give all mankind the example of humility and suffer death upon the cross for our sins: Mercifully grant us a believing knowledge of this, and that, following the example of His patience, we may be made partakers of the benefits of His sacred passion and death, through the same, Thy beloved Son, Jesus Christ, our Lord, who liveth and reigneth with Thee and the Holy Ghost, one true God, world without end. Amen.


Messianic Arrival
Lenski:
John materially supplements the accounts of the synoptists which he assumes are well known to his readers. From him we learn that the day is the Sunday before Jesus’ death. While Jesus makes ready to ride into Jerusalem, the multitude of festival pilgrims, having heard of his coming, starts out to meet and to receive him (John 12:12). In v. 9 two multitudes are referred to: one that was with Jesus, and another that went out to meet him. John makes this point clear. From him we also learn that the enthusiasm grew so high because of the raising of Lazarus and that, after spending the Sabbath in Bethany, Jesus started from this village for his entry into the city.
Judging from the way in which Mark and Luke combine Bethphage and Bethany, the two were close together, the former lying in the direction toward Jerusalem. All trace of Bethphage has disappeared, but Bethany is still known; it lies a little over the ridge and on the far side of Mount Olivet. Here Jesus paused.
2) This time he will not walk but will ride into Jerusalem.
Lenski, R. C. H.: The Interpretation of St. Matthew's Gospel. Minneapolis, MN. : Augsburg Publishing House, 1961, S. 800

Everything about Jesus’ entry is Messianic, proclaiming His role and His title.

To understand this, we have to step back a little before the arrival.

There was so much tension and fear among the disciples, before they headed toward Jerusalem, to heal Lazarus, that Doubting Thomas said they would go there to die.

KJV John 11:14 Then said Jesus unto them plainly, Lazarus is dead. 15 And I am glad for your sakes that I was not there, to the intent ye may believe; nevertheless let us go unto him. 16 Then said Thomas, which is called Didymus, unto his fellowdisciples, Let us also go, that we may die with him.

The healing of Lazarus was the key event that explains Palm Sunday and the immediate reaction by religious and government leaders.

Jesus deliberately delayed his arrival in nearby Bethany, where Lazarus died.

KJV John 11:6 When he had heard therefore that he was sick, he abode two days still in the same place where he was.

His dear friend was dead for days and buried in a tomb. No one could say Lazarus was just in a swoon or coma (a fear in those days and even in modern times – being buried alive). Jesus was warned away from the tomb, because of putrefaction of the corpse – in blunt terms – “He stinks.”

KJV John 11:39 Jesus said, Take ye away the stone. Martha, the sister of him that was dead, saith unto him, Lord, by this time he stinketh: for he hath been dead four days.

Jesus, who had just said “I am the Resurrection and the Life,” spoke –

KJV John 11:43 And when he thus had spoken, he cried with a loud voice, Lazarus, come forth.

The Word of God called Lazarus to life again, and he came out of the opened tomb.

He was a rich, influential man. Instead of being buried in the ground, he had a tomb carved out of rock. The long funeral meant that people came from all over to be with his family.
KJV John 12:9 Much people of the Jews therefore knew that he was there: and they came not for Jesus' sake only, but that they might see Lazarus also, whom he had raised from the dead.

Thus, when Jesus went to nearby Jerusalem, the crowd followed from Bethany, and the miracle was broadcast in Jerusalem, so people streamed out of the city to meet the Man who was Lord over death itself.

Lazarus was a problem for the Jewish leaders, because he was living proof of the power of Christ. They plotted against him too, but he was not harmed.

KJV John 12:10 But the chief priests consulted that they might put Lazarus also to death;

This is why we need to read John’s Gospel with the first three, since essential details explain to a later audience what the first listeners and believers knew from apostolic testimony.

The triumphal entry on Palm Sunday happened in conjunction with the raising of Lazarus.

But some are thinking, “Jesus raised the widow’s son and the young girl. There were witnesses then, too.”

That is true, but raising of Lazarus was parallel to a state funeral of the governor of a state, multiple days of mourning, family and friends from the entire region, followed by his being raised from the dead.

Jesus was already known for His miracles and teaching. This miracle confirmed His power in the neighborhood of Jerusalem, at the peak of His three-year public ministry.

Too often the crucifixion of Jesus is portrayed as if a meek, mild teacher was suddenly grabbed by the authorities, beaten, and killed. Thus it looks like strange and bizarre injustice.

In light of the raising of Lazarus, we can see that Jesus terrified the Jewish and Roman authorities. They did not work together against Him because He was weak and harmless, but because He had power over life and death.


Matthew 21:4 All this was done, that it might be fulfilled which was spoken by the prophet, saying, 5 Tell ye the daughter of Sion, Behold, thy King cometh unto thee, meek, and sitting upon an ass, and a colt the foal of an ass.

This royal entry was well known to the citizens. It happened after the successful Maccabean war, about 200 years before the crucifixion. Entering Jerusalem and being hailed as the Messiah, the Son of David, was a repeat of that success, but it was different too.

Jesus said, “My Kingdom is not of this world.”

But men are always moved to protect their jobs, even when their jobs are not really threatened. Jesus was a thread to the Jewish and Roman leaders.

Jesus defeated both by rising from the dead, and overcame both kingdoms. Christianity was nothing at that moment but spread over the entire world. The Roman Empire was the greatest kingdom of all, up to that point, but was already in decline from corruption and immorality. The Roman Emperor Tiberius was all-powerful but incredibly vile and immoral. He is now remembered for his evil.

When Jesus entered Jerusalem, He created faith and joy. The children believed and cried out. The adults shouted in triumph. Jesus was told to silence His followers, but He said,

KJV Luke 19:40 And he answered and said unto them, I tell you that, if these should hold their peace, the stones would immediately cry out.

God gave His people centuries to prepare for the Messiah, teaching everything that would happen – in the Psalms and the Prophets.

Jesus three-year public ministry gave everyone in the region a chance to hear Him teach the Gospel and perform miracles.

Jesus brought His miracle with Him to Jerusalem. Lazarus was living proof of the Messiah’s power over life and death.

Some like to concentrate on how people turned from cheering to jeering, but perhaps they were two different crowds. I like to look at how the Gospel entered the highest levels of Jewish leadership, so that two powerful figures (Nicodemus, Joseph of Arimathea) were involved in their support of the Gospel.

Even the Roman governor had a chance to see and hear Jesus. Pontius Pilate could not say on his deathbed, “But I didn’t know.”

God makes His Gospel go forth in many different ways. Sometimes it is spread by persecution, the way people put out a grease or oil fire by pouring water on it and making it spread farther.

God provides many ways to show that the Gospel Word is life over death, forgiveness over sin.
Posted by Ichabod the Glory Has Departed at 6:40 AM