The Sunday Before Epiphany 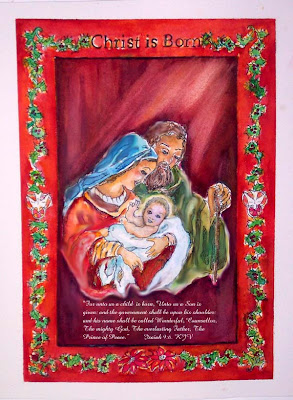 Christ Is Born, by Norma Boeckler

The Sunday before Epiphany


The Hymn # 126 Arise and Shine 3:67
The Confession of Sins
The Absolution
The Introit p. 16
The Gloria Patri
The Kyrie p. 17
The Gloria in Excelsis
The Salutation and Collect p. 19
The Epistle and Gradual
The Gospel
Glory be to Thee, O Lord!
Praise be to Thee, O Christ!
The Nicene Creed p. 22
The Sermon Hymn # 128 Brightest and Best 3:29

KJV 1 Peter 4:12 Beloved, think it not strange concerning the fiery trial which is to try you, as though some strange thing happened unto you: 13 But rejoice, inasmuch as ye are partakers of Christ's sufferings; that, when his glory shall be revealed, ye may be glad also with exceeding joy. 14 If ye be reproached for the name of Christ, happy are ye; for the spirit of glory and of God resteth upon you: on their part he is evil spoken of, but on your part he is glorified. 15 But let none of you suffer as a murderer, or as a thief, or as an evildoer, or as a busybody in other men's matters. 16 Yet if any man suffer as a Christian, let him not be ashamed; but let him glorify God on this behalf. 17 For the time is come that judgment must begin at the house of God: and if it first begin at us, what shall the end be of them that obey not the gospel of God? 18 And if the righteous scarcely be saved, where shall the ungodly and the sinner appear? 19 Wherefore let them that suffer according to the will of God commit the keeping of their souls to him in well doing, as unto a faithful Creator.

Sunday Before Epiphany
O Lord God, heavenly Father, who didst suffer Thy dear Son, Jesus Christ, to become a stranger and a sojourner in Egypt for our sakes, and didst lead Him safely home to His fatherland: Mercifully grant that we poor sinners, who are strangers and sojourners in this perilous world, may soon be called home to our true fatherland, the kingdom of heaven, where we shall live in eternal joy and glory; through the merits of Thy Son, Jesus Christ our Lord, who liveth and reigneth with Thee and the Holy Ghost, one true God, world without end. Amen.

KJV 1 Peter 4:12 Beloved, think it not strange concerning the fiery trial which is to try you, as though some strange thing happened unto you: 13 But rejoice, inasmuch as ye are partakers of Christ's sufferings; that, when his glory shall be revealed, ye may be glad also with exceeding joy.

When we consider the New Testament teaching of the cross, or as Luther called it, the dear, holy cross, we have to think first about Jesus and His family.

The experience of the cross is not misfortune, such as what we all experience during an economic decline. Nor is it simply illness. The cross is suffering because of the Word.

For example, Mary was promised the Savior, and Joseph planned to divorce her. For Joseph, the miracle promised was a burden he had to bear in silence. In those times, a couple was married first and later occupied a home. They were not simply engaged, but married. (A man does not divorce his fiancé.) It was the Jewish custom to be formally married first, with a written contract, and consummate the marriage later when living quarters could be arranged. (See Lenski on this.)

Mary and Joseph received the promise of a great miracle, the greatest miracle, in faith. Their reward was hardship, the cross, because of the Word. They experienced rejection in the manner of Christ’s birth. When Jesus was brought to the Temple the first time, Simeon said to Mary,

KJV Luke 2:34 And Simeon blessed them, and said unto Mary his mother, Behold, this child is set for the fall and rising again of many in Israel; and for a sign which shall be spoken against; 35 (Yea, a sword shall pierce through thy own soul also,) that the thoughts of many hearts may be revealed.

Luther commented - “What kind of saying is that to give to a young mother?”

Because Herod was furious with the Wise Men, and afraid of the Messiah (the anointed king), he did his best to kill the infant. Joseph, Mary, and Jesus had to escape until it was safe again. Many baby boys lost their lives because of Herod’s wrath.

The birth of Christ, as the miracle of miracles, was one in which His human nature was tested from the beginning. The long climb to Bethlehem was difficult for Mary. There is no indication that she rode on a donkey, as the Christmas cards show, or that fruit trees bowed down to her to give Mary their fruit, as the Roman Catholic legends says.

When Jesus told us to take up the cross daily, He was already an example, even before the crucifixion.

The apostle Peter compares the trial of remaining true to the Word with being refined, as silver and gold are.

KJV 1 Peter 1:6 Wherein ye greatly rejoice, though now for a season, if need be, ye are in heaviness through manifold temptations: 7 That the trial of your faith, being much more precious than of gold that perisheth, though it be tried with fire, might be found unto praise and honour and glory at the appearing of Jesus Christ: 8 Whom having not seen, ye love; in whom, though now ye see him not, yet believing, ye rejoice with joy unspeakable and full of glory:

KJV Zechariah 13:9 And I will bring the third part through the fire, and will refine them as silver is refined, and will try them as gold is tried: they shall call on my name, and I will hear them: I will say, It is my people: and they shall say, The LORD is my God.

The spiritual advice in Peter’s letter contradicts our natural feelings, because our Old Adam does not like the cross. Nevertheless, the Holy Spirit teaches the cross as a blessing, not as a curse:

1 Peter 4:14 If ye be reproached for the name of Christ, happy are ye; for the spirit of glory and of God resteth upon you: on their part he is evil spoken of, but on your part he is glorified.

This should remind us of the Beatitudes, which climaxes with the most difficult blessing to accept:

KJV Matthew 5:11 Blessed are ye, when men shall revile you, and persecute you, and shall say all manner of evil against you falsely, for my sake. 12 Rejoice, and be exceeding glad: for great is your reward in heaven: for so persecuted they the prophets which were before you.

We want to please man and to be praised by the multitude, but Paul taught:

KJV Galatians 1:10 For do I now persuade men, or God? or do I seek to please men? for if I yet pleased men, I should not be the servant of Christ.

We can see through history that false versions of Christianity have always fallen for salvation through works. Paul might have been more popular at the time if he had gone along with the fad. But he saw through to the dangers and taught against it in his special role as apostle.

The Cross Is For Everyone

There is a common attitude today that most people can enjoy all the benefits of the Christian faith, without the cross. Those people seem to think that a designated few can bear the cross for everyone else.

Jesus did not teach that. Truly, the prophets and apostles paid the greatest price, with their lives. So did the martyrs of the past and present.

Jesus’ words are universal in scope.

KJV Matthew 10:38 And he that taketh not his cross, and followeth after me, is not worthy of me.

KJV Matthew 16:24 Then said Jesus unto his disciples, If any man will come after me, let him deny himself, and take up his cross, and follow me.

KJV Mark 10:21 Then Jesus beholding him loved him, and said unto him, One thing thou lackest: go thy way, sell whatsoever thou hast, and give to the poor, and thou shalt have treasure in heaven: and come, take up the cross, and follow me.

KJV Luke 14:27 And whosoever doth not bear his cross, and come after me, cannot be my disciple.

The Church Shrinkers do not like the cross, but they love the term disciple. They want to “make disciples” (wrong translation). The best way to be a disciple is to take up the cross, to pay a price for adhering to the pure Word of God. If someone does not bear his own cross, he is not worthy to be a disciple.

There is a reason Willow Creek looks like a suburban mall and does not allow a cross in the worship (seeker) area:

KJV 1 Corinthians 1:18 For the preaching of the cross is to them that perish foolishness; but unto us which are saved it is the power of God.

The Shrinkers glory in entertainment, not the cross:

KJV Galatians 6:14 But God forbid that I should glory, save in the cross of our Lord Jesus Christ, by whom the world is crucified unto me, and I unto the world.

Our example is Christ –

KJV Hebrews 12:2 Looking unto Jesus the author and finisher of our faith; who for the joy that was set before him endured the cross, despising the shame, and is set down at the right hand of the throne of God.

What Is Good about the Cross?
The cross is good because our faith needs refining. When there are large deposits of metal, such as copper, some of the remainder is gold or silver. One special set of silver was created from the silver refined from a copper mine. It was given to the US Missouri battleship and fought over. The base metals are in abundance but silver and gold are prized and separated out with great labor, because they are worth so much.

Troubles because of the Word refine our faith. We are in the refiner’s fire all our lives if we cling to God’s Word instead of man’s reason. The dross or slag is never entirely consumed, because of our base nature. But the cross brings out the gold and silver of the Gospel promises. We see what is lasting and valuable and separate that from the base.

Posted by Ichabod the Glory Has Departed at 7:12 AM