The Second Sunday after the Epiphany 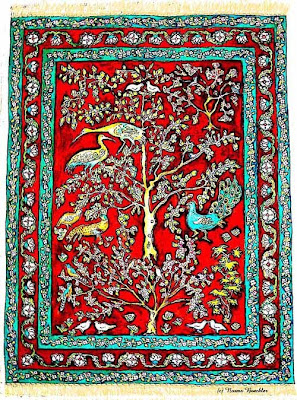 The Tree of Life, by Norma Boeckler

The Second Sunday after the Epiphany


The Hymn #39 Praise to the Lord 3.1
The Confession of Sins
The Absolution
The Introit p. 16
The Gloria Patri
The Kyrie p. 17
The Gloria in Excelsis
The Salutation and Collect p. 19
The Epistle and Gradual
The Gospel
Glory be to Thee, O Lord!
Praise be to Thee, O Christ!
The Nicene Creed p. 22
The Sermon Hymn # 370 My Hope Is Built 3.11

KJV Romans 12:6 Having then gifts differing according to the grace that is given to us, whether prophecy, let us prophesy according to the proportion of faith; 7 Or ministry, let us wait on our ministering: or he that teacheth, on teaching; 8 Or he that exhorteth, on exhortation: he that giveth, let him do it with simplicity; he that ruleth, with diligence; he that sheweth mercy, with cheerfulness. 9 Let love be without dissimulation. Abhor that which is evil; cleave to that which is good. 10 Be kindly affectioned one to another with brotherly love; in honour preferring one another; 11 Not slothful in business; fervent in spirit; serving the Lord; 12 Rejoicing in hope; patient in tribulation; continuing instant in prayer; 13 Distributing to the necessity of saints; given to hospitality. 14 Bless them which persecute you: bless, and curse not. 15 Rejoice with them that do rejoice, and weep with them that weep. 16 Be of the same mind one toward another. Mind not high things, but condescend to men of low estate. Be not wise in your own conceits.

KJV John 2:1 And the third day there was a marriage in Cana of Galilee; and the mother of Jesus was there: 2 And both Jesus was called, and his disciples, to the marriage. 3 And when they wanted wine, the mother of Jesus saith unto him, They have no wine. 4 Jesus saith unto her, Woman, what have I to do with thee? mine hour is not yet come. 5 His mother saith unto the servants, Whatsoever he saith unto you, do it. 6 And there were set there six waterpots of stone, after the manner of the purifying of the Jews, containing two or three firkins apiece. 7 Jesus saith unto them, Fill the waterpots with water. And they filled them up to the brim. 8 And he saith unto them, Draw out now, and bear unto the governor of the feast. And they bare it. 9 When the ruler of the feast had tasted the water that was made wine, and knew not whence it was: (but the servants which drew the water knew;) the governor of the feast called the bridegroom, 10 And saith unto him, Every man at the beginning doth set forth good wine; and when men have well drunk, then that which is worse: but thou hast kept the good wine until now. 11 This beginning of miracles did Jesus in Cana of Galilee, and manifested forth his glory; and his disciples believed on him.

Second Sunday After Epiphany
Lord God, heavenly Father, we thank Thee, that of Thy grace Thou hast instituted holy matrimony, in which Thou keepest us from unchastity, and other offenses: We beseech Thee to send Thy blessing upon every husband and wife, that they may not provoke each other to anger and strife, but live peaceably together in love and godliness, receive Thy gracious help in all temptations, and rear their children in accordance with Thy will; grant unto us all to walk before Thee, in purity and holiness, to put all our trust in Thee, and lead such lives on earth, that in the world to come we may have everlasting life, through the same, Thy beloved Son, Jesus Christ our Lord, who liveth and reigneth with Thee and the Holy Ghost, one true God, world without end. Amen.

Water into Wine – God’s Word Transforms
This Gospel selection has several different lessons in it.
As Luther preached, the Gospel shows that Jesus honored and blessed marriage. He was invited and come with His disciples.

During the Middle Ages, the Church promoted monasticism and stopped allowing priests to be married. They liked to refer to the papacy as the Chair of Peter, but they did not want their priests to have mothers-in-law, as Peter did. (Jesus healed Peter’s mother-in-law in the Gospel of Mark.) But I learned at Notre Dame, that priests were married at the time of the Reformation. A tax on married priests made a lot of money for the pope. However, that semi-official approval was removed during the Counter-Reformation.

The concept of the law in Roman Catholicism is puzzling to Protestants. The rules are very strict and broken all the time. A man can be married and have several children, but his marriage is annulled if he is rich, powerful, and generous to those who hold the Office of the Keys. (For a Lutheran example, see Marvin Schwan and his marriages.)

Marriage was considered a low estate, one where someone never reached the spiritual blessings of religious vocations. Every step up the ladder was more spiritually blessed than the lower levels. Ordinary nuns and priests lived at a much higher level than the laity. Bishops and cardinals were above the priests. The pope was (and supposedly is) the Vicar of Christ, with the keys to heaven.

Luther changed the idea of the family by pointing out that everything done in faith glorified God. Moreover, since he was trained at a Roman Catholic university, he knew how to unravel their enslaving arguments. The works they promoted were pathways to Hell, not Heaven. One of his best comments on the entire Roman Catholic system of sanctification was this – “They purchase Hell when they could have Heaven for free.”

Pietists shun what they do not approve and they shun whomever they do not approve. Jesus, by attending this marriage, showed His divine approval of the married state. Nor was Peter rejected as a disciple because of his marriage. People debate about Paul being previously married and widowed. That is a historical question and not a doctrinal one. Some language in his letters and rabbinic tradition would argue that he was married at one time. Traditional Jews and Muslims believe that all people should be married.

Today we have just the opposite, an odd parallel to Medieval Romanism. Marriage is shunned because people can postpone the end of their hedonism until middle age, as Luther observed. They shun marriage so they can have more money and freedom. And they shun marriage because it may not work out perfectly. They trust only themselves and not the Word. Lacking faith in God’s Promises, they end up with the very aspects of life they fear the most.

Luther compared turning water into wine that same miracle where God transforms a couple through marriage. God blesses marriage far beyond anyone’s expectations, with an abundance difficult to measure.

Miracle of the Word
This miracle also shows that Christ could and does transform instantly through the Word. There is no difference between the will of God and the Word of God.

The conversation between Jesus and His mother could be interpreted as a battle of wills, but that ignores His divine knowledge of people. In being reluctant – My hour has not yet come – He encouraged His mother to say, “Do whatever He says.”

The actual miracle is so clear that no one could claim it was a trick. Even today there are ways to pour liquids together and get a quick change of color.

The men knew they drew water to fill the containers, because they did it themselves. They drew from the water and carried it to the host of the feast. Not only was it wine, but it was such good wine that he scolded the groom for saving the best wine until last. He should have served that first.

In the Christian faith, the one doctrine ignored the most and taught against the most is illustrated here - God’s Word is always effective. The Word accomplishes far more than we can expect or hope. No barrier can stop it.

When people deny the Real Presence in communion, or the power of the Consecration by the Word, they are denying this very doctrine.

When they trust in human inventions instead of faithfulness to the Word, they are rejecting what is clearly taught here.

When Pietists teach that God absolved the entire world, without the Word, they are going against the clear teaching of the Scriptures and making up something never stated or implied in the Word.

Luther used the term Enthusiasm to describe all false doctrine, which separates the Holy Spirit from the Word.

To counter our doubts about God’s ability, power, and compassion, all we need to do is meditate on these miracles of the Word.

This was probably a poor family, since Mary seems to be in charge of the wedding, not the bride or groom’s parents. Another measure of their poverty is running out of wine, which would be a social disaster for the time. By today’s standards, they should not have been married, because of their lack of money. And yet, Jesus graced their marriage by being their with His disciples and by performing the first of all His miracles.

Against Rome
Jesus’ address to His mother, “Woman,” often softened by translators, is repeated at the crucifixion.

Before the development of Mariolatry, the Word showed everyone that Jesus as Lord addressed His mother as “Woman.”

Medieval error elevated Mary above Jesus and turned Christianity into a Mary religion, as it still is today. One of the first signs of a Lutheran pastor joining Rome is his obsession with Mary.

Posted by Ichabod the Glory Has Departed at 7:09 AM