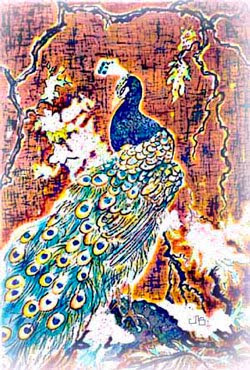 Peacock by Norma Boeckler. Every tuft and feather - created through Christ.

All Things Made by Him

KJV Romans 5:1 Therefore being justified by faith, we have peace with God through our Lord Jesus Christ: 2 By whom also we have access by faith into this grace wherein we stand, and rejoice in hope of the glory of God. 3 And not only so, but we glory in tribulations also: knowing that tribulation worketh patience; 4 And patience, experience; and experience, hope: 5 And hope maketh not ashamed; because the love of God is shed abroad in our hearts by the Holy Ghost which is given unto us. 6 For when we were yet without strength, in due time Christ died for the ungodly. 7 For scarcely for a righteous man will one die: yet peradventure for a good man some would even dare to die. 8 But God commendeth his love toward us, in that, while we were yet sinners, Christ died for us. 9 Much more then, being now justified by his blood, we shall be saved from wrath through him. 10 For if, when we were enemies, we were reconciled to God by the death of his Son, much more, being reconciled, we shall be saved by his life.

KJV John 1:1 In the beginning was the Word, and the Word was with God, and the Word was God. 2 The same was in the beginning with God. 3 All things were made by him; and without him was not any thing made that was made. 4 In him was life; and the life was the light of men. 5 And the light shineth in darkness; and the darkness comprehended it not. 6 There was a man sent from God, whose name was John. 7 The same came for a witness, to bear witness of the Light, that all men through him might believe. 8 He was not that Light, but was sent to bear witness of that Light. 9 That was the true Light, which lighteth every man that cometh into the world. 10 He was in the world, and the world was made by him, and the world knew him not. 11 He came unto his own, and his own received him not. 12 But as many as received him, to them gave he power to become the sons of God, even to them that believe on his name: 13 Which were born, not of blood, nor of the will of the flesh, nor of the will of man, but of God. 14 And the Word was made flesh, and dwelt among us, (and we beheld his glory, the glory as of the only begotten of the Father,) full of grace and truth. 15 John bare witness of him, and cried, saying, This was he of whom I spake, He that cometh after me is preferred before me: for he was before me. 16 And of his fulness have all we received, and grace for grace.

All Things Made by Him

The Bible is a small book, especially small when we consider that it begins with Creation and finishes with the end of history.

Many individual works by men like Chemnitz and Gerhard are larger than the entire Bible.

I am making this point to say that nothing in the text should be ignored or taken for granted.

Unlike most books that we should race through, because they have little to say, the Bible should be studied phrase by phrase.

John 1:1 is a good example. It is no accident that “the Word” is used three times. Nor is an accident that only two books in the Bible start the same way – “In the beginning.”

“In the beginning” reminds us of Genesis and unites the Gospel of John with Genesis. Many of the major themes of John reflect Genesis, including Creation and Abraham.

Throughout the Bible, the three-ness of the One God is emphasized by groups of three. Instead of human formulas, we have many different ways of expressing God the Father, God the Son, God the Holy Spirit.

If we line out the opening of John as poetry, the message is even more compelling, clear, and profound:

All three references to the Word are to Christ, and yet Christ is not 1/3 of God.

KJV Colossians 2:9 For in him dwelleth all the fulness of the Godhead bodily.
The Bible exalts Christ from the beginning, because Christ earned our forgiveness on the cross. Therefore, from Genesis 3 the saving role of the Son of God is the clear Gospel message of the Scriptures. Adam and Eve were expelled from the garden, yet the Messiah was promised to them, Gen 3:15.

Forgiveness and salvation are closely connected with Creation.

Genesis 1 and John 1 together show that every single thing in the universe has been created by Him as the Creating Word. To make this clear, John reveals that “apart from Him” nothing was created.

We take this for granted, but we should not. We think of human life as created through Christ, but also all life, from the lowest forms. All elements. All the stars, planets, galaxies. Everything is created by Him and through Him.

The Holy Spirit works through the Gospel to create faith in us, and that divinely created faith receives the Gospel Promise of forgiveness and salvation, making us “New Creations.”

If we became Christians by making a decision, we would be called “New Decisions” in the Bible. Instead, we are called New Creations (creatures).

KJV 2 Corinthians 5:17 Therefore if any man be in Christ, he is a new creature: old things are passed away; behold, all things are become new.

KJV Galatians 6:15 For in Christ Jesus neither circumcision availeth any thing, nor uncircumcision, but a new creature.
Posted by Ichabod the Glory Has Departed at 4:30 PM