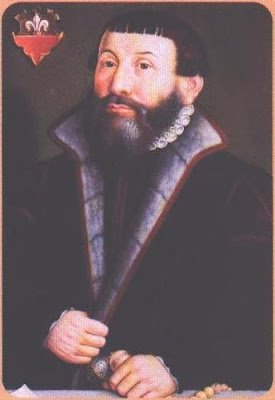 KJV 1 Timothy 3:16 And without controversy great is the mystery of godliness: God was
manifest in the flesh,
justified in the Spirit,
seen of angels,
preached unto the Gentiles,
believed on in the world,
received up into glory.

KJV Luke 1:46 And Mary said, My soul doth magnify the Lord, 47 And my spirit hath rejoiced in God my Saviour. 48 For he hath regarded the low estate of his handmaiden: for, behold, from henceforth all generations shall call me blessed. 49 For he that is mighty hath done to me great things; and holy is his name. 50 And his mercy is on them that fear him from generation to generation. 51 He hath shewed strength with his arm; he hath scattered the proud in the imagination of their hearts. 52 He hath put down the mighty from their seats, and exalted them of low degree. 53 He hath filled the hungry with good things; and the rich he hath sent empty away. 54 He hath holpen his servant Israel, in remembrance of his mercy; 55 As he spake to our fathers, to Abraham, and to his seed for ever. 56 And Mary abode with her about three months, and returned to her own house.


The Confession of Faith

KJV 1 Timothy 3:16 And without controversy great is the mystery of godliness: God was
1. manifest in the flesh,
2. justified in the Spirit,
3. seen of angels,
4. preached unto the Gentiles,
5. believed on in the world,
6. received up into glory.

I listed this one verse according to its parallel verb forms. This is poetic in its form and could be either one of the earliest creeds or hymns, or both. Many hymns are creeds and Luther turned a creed into a hymn (We All Believe in One True God).

It is good to look at a verse in its context.

The verse before says this:

KJV 1 Timothy 3:15 But if I tarry long, that thou mayest know how thou oughtest to behave thyself in the house of God, which is the church of the living God, the pillar and ground of the truth.

Verse 15 has a personal touch, and I read verse 16 as reminding them of their confession of faith.

Verse 16 closes the chapter, meaning the later editors felt a new theme was starting. Paul did not write in chapters and verses.

KJV 1 Timothy 4:1 Now the Spirit speaketh expressly, that in the latter times some shall depart from the faith, giving heed to seducing spirits, and doctrines of devils; 2 Speaking lies in hypocrisy; having their conscience seared with a hot iron; 3 Forbidding to marry, and commanding to abstain from meats, which God hath created to be received with thanksgiving of them which believe and know the truth. 4 For every creature of God is good, and nothing to be refused, if it be received with thanksgiving: 5 For it is sanctified by the word of God and prayer. 6 If thou put the brethren in remembrance of these things, thou shalt be a good minister of Jesus Christ, nourished up in the words of faith and of good doctrine, whereunto thou hast attained. 7 But refuse profane and old wives' fables, and exercise thyself rather unto godliness.

So sound doctrine (1 Timothy 3:16) is followed by contrasting false doctrine.

And without controversy great is the mystery of godliness:
Mystery is the clear indication that this is doctrine revealed by the Holy Spirit. Paul was taught directly by Christ and hinted at the great privileges given to him, accompanied by the cross. Doubtless they strengthened him during his many trials.

“God was” – We can speak of God and Christ, either one, because the fullness of the godhead dwelt in Him. Because of the Three-ness of One God, we emphasize a Person at certain times, two Persons at various times (often the Father-Son relationship), and the Holy Trinity at other times. This enrages the rationalists, who cannot accept what the Holy Spirit reveals as a mystery. They fling themselves at the doctrine of the Trinity to prove what they have already assumed, that this cannot be.

One Jehovah’s Witness said of Jesus praying to the Father, “How can God pray to God. I cannot understand that.” I said, “My dog can’t understand it either.” He said goodbye by saying the founder of Jonestown (Disciples of Christ) was a Lutheran. Needless to say, he left angry.

Jesus is God. That is our confession. In one phrase the doctrine of God in the flesh (the Incarnation) is taught – Manifest (seen) in the flesh.

“manifest in the flesh” – Both God and man. This informs the Virgin Birth (true man and true God) and His suffering on the cross for our sins (true man and true God). The Virgin Birth is a unique miracle, unlike anything else in history. Early heretics had trouble with Jesus being born of a woman, and heretics across time have either attacked His humanity or divinity. Modernists hate His divinity while earlier false teachers questioned the humanity of Christ. As Chemnitz showed so clearly, the Scriptures and confessors of the past have taught both as the union of both natures in the One Person of Christ. We see that throughout the Scriptures, often with one Nature emphasized over another (being thirsty – human, walking on water – divine).

“justified in the Spirit”

This is the phrase, I am sure, used by the Pietists to associate the resurrection of Christ with the world being “declared not guilty.” But this phrase applies to Christ, and we can see why. Jesus died as a traitor to Rome, a criminal. All men die because they are sinners and mortal. Confessing the truth of Christ includes His innocent, perfect, obedient life. Therefore, in raising Jesus from the dead, God the Father declared His righteous work (my Righteous Servant – Isaiah). He rose because of His innocence. And because He rose from death, we believe in our own eternal life because He won forgiveness, salvation, and eternal life for us.

“seen of angels” – appeared to angels

This emphasizes His glorious resurrection. In other places the human witnesses are listed, and the early Church knew them. The entire foundation of Christianity was based upon those who witnessed the risen Christ and heard Him teach the Word in His exalted state.

To this day, even some of the worst critics of Christianity admit to the reality of the resurrection – not that we need their witness. But it is interesting to see them squirm around this greatly-witnessed fact. Nevertheless, the sign of a true wolf in sheep’s clothing is one who dances around the issue and says it is “not important” or “not based on an empty grave, but the faith and hope of His disciples.”

preached unto the Gentiles (or nations, or pagans)

The imperial journalists were men who proclaimed news, such as “the emperor is arriving in a month.” Even in modern times, there were town criers who were enlisted to take the news to everyone. The word for these proclamations is the one we use for “preaching.” The proclamation of the Gospel of Christ to all people was the fulfillment of Old Testament prophecies.

“believed on in the world,”

The power of the Word is proven in people believing. Fraud will last a few years, but the truth endures. How exciting it must have been to realize the Redeemer of the world had been among people that the early Christians knew personally. And they realized very quickly that this Gospel was spreading across the Roman Empire, hastened by persecution, and enabled by the greatest highway system of all time. (Do you think any given mile of highway today will be used in 2,000 years? 200 years? Roman roads are still being used today.)

“received up into glory”

The apostles were also eye-witnesses of the Ascension of Christ.
Posted by Ichabod the Glory Has Departed at 4:32 PM