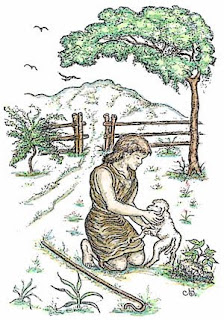 The First Sunday in Advent


The Hymn # 245 God Loved the World 4:6
The Confession of Sins
The Absolution
The Introit p. 16
The Gloria Patri
The Kyrie p. 17
The Gloria in Excelsis
The Salutation and Collect p. 19
The Epistle and Gradual
The Gospel
Glory be to Thee, O Lord!
Praise be to Thee, O Christ!
The Nicene Creed p. 22
The Sermon Hymn # 290 We Have A Sure 4:89

KJV Romans 13:11 And that, knowing the time, that now it is high time to awake out of sleep: for now is our salvation nearer than when we believed. 12 The night is far spent, the day is at hand: let us therefore cast off the works of darkness, and let us put on the armour of light. 13 Let us walk honestly, as in the day; not in rioting and drunkenness, not in chambering and wantonness, not in strife and envying. 14 But put ye on the Lord Jesus Christ, and make not provision for the flesh, to fulfil the lusts thereof.


First Sunday in Advent - The Collects of Veit Dietrich
Lord God, heavenly Father, we thank Thee, we bless and praise Thee forever, that Thou didst send Thy Son to rule over us poor sinners, who for our transgressions did justly deserve to remain in the bondage of sin and Satan, and didst give us in Him a meek and righteous King, who by His death became our Savior from sin and eternal death: We beseech Thee so to enlighten, govern and direct us by Thy Holy Spirit, that we may ever remain faithful to this righteous King and Savior, and not, after the manner of the world, be offended with His humble form and despised word, but, firmly believing in Him, obtain eternal salvation; through the same, Thy beloved Son, Jesus Christ, our Lord, who liveth and reigneth with Thee and the Holy Ghost, one true God, world without end. Amen.

The Armor of Light

KJV Romans 13:11 And that, knowing the time, that now it is high time to awake out of sleep: for now is our salvation nearer than when we believed. 12 The night is far spent, the day is at hand: let us therefore cast off the works of darkness, and let us put on the armour of light.

Whenever I read about justification, I find this quotation – that justification by faith is the chief article of the Christian faith.

"This article concerning justification by faith (as the Apology says) is the chief article in the entire Christian doctrine, without which no poor conscience can have any firm consolation, or can truly know the riches of the grace of Christ, as Dr. Luther also has written: If this only article remains pure on the battlefield, the Christian Church also remains pure, and in goodly harmony and without any sects; but if it does not remain pure, it is not possible that any error or fanatical spirit can be resisted. (Tom. 5, Jena, p. 159.) And concerning this article especially Paul says that a little leaven leaveneth the whole lump." Formula of Concord, SD, III. 6, Righteous of Faith before God, Concordia Triglotta, St. Louis: Concordia Publishing House, 1921, p. 917.
In the Synodical Conference, the next step after this quotation is to attack justification by faith, to attack faith itself, and to extol the idea of everyone being forgiven, absolved, justified without faith. And they call that the pure Gospel, not even comprehending that they are repeating the heresy of ELCA called Gospel Reductionism or the older heresy of Universalism.
Like John, Paul used night and day to symbolize falsehood and truth. The night was especially oppressive in ancient times because few used illumination, even in palaces. That may not have always been the case, but I have read of one palace where the pretender’s face could not be seen. Lacking streetlights and houselights, night was a good time for hedonism in all cultures.
As seen in Paul’s discussion in Galatians, tampering with the Gospel was not a small matter, but a major one. Especially dangerous was creating an alloy between false doctrine and sound doctrine, as if a little falsehood was harmless.

First of all, the word justification always means “justification by faith” in the Scriptures and in the Book of Concord. It is confusing, if not evil, to use a term differently from its use in the Scriptures. Merging terms is a trick of unionists and all false teachers. They glide from one thing to another and expect to dazzle people.

Baptism is not communion, and the Holy Spirit is not the Word. Baptism and communion are both sacraments, the visible Word, but they differ. I heard one worship expert say that babies should get communion because babies are baptized. Then perhaps babies should be ordained since babies are baptized. There must be a reason why God gave us forgiveness in different forms. Infant baptism is the purest form of the Gospel, as Luther said, because babies do not have the reasoning power to reject what God offers so freely, declaring them forgiven, taking away the power of original sin, planting faith in their hearts, and granting the indwelling of the Holy Spirit.

The term monergism is used for the Christian faith. That means that God acts alone, according to the Scriptures.

The Atonement was Christ’s act on our behalf, taking on Himself the sins of the world. Before that time, people recognized sacrifice as atoning for sin. In the Greek cycle of tragedies, the human sacrifice of Iphigenia was seen as a terrible crime done to appease the gods. In Judaism, animals were sacrificed in the Temple. Their blood atoned for the sins of the people, leading them to understand the sacrifice of the Lamb of God.

When people confuse the Atonement with justification by faith, they create a formula completely unknown in the Scriptures, the Confessions, and the theologians after Luther.

The Atonement means that Christ redeemed the entire world from sin, paying the price and releasing us from the dominion of Satan and death. This Atonement is also described in other terms, such as redemption (two different words), propitiation, expiation, and reconciliation. Each term has a history and associations with it.

The Word of God assures us that there is no human contribution to forgiveness and salvation. Whenever human effort, works, or merit get involved, people start to wonder if they have done enough. That is also a fine way to motivate people with the Law, saying, “Are you really worthy? Have you done enough?”

The Atonement and its associated words cannot possibly mean that “God declared the entire world forgiven.” That brash statement cannot be found in the Scriptures, Luther, the Confessions, and the post-Concord writers. Not until the Pietist Burk was such a notion in print (as far as I know at this point).

Moreover, in surveying all of orthodox Lutheran literature, the man who knew it best said (and I paraphrase for the moment) – justification only means justification by faith. No one is forgiven apart from faith. (Robert Preus, Justification and Rome)

The “reconciliation” use for absolving the world means simply that God is reconciled to the world by means of Christ’s sacrifice. That was the ultimate concern in ancient days. Unlike today, people had a great sense of their sinfulness and the need to pay for that sin. They believed in such things as a purging after death (Plato) and various forms of sacrifice. Many of the pagans went through initiation into secret or mystery religions where they engaged in various acts to participate in the revelation of the saving secret. One ceremony involved walking under a grate while a bull was sacrificed above, baptizing the initiate in blood.

Paul’s use of reconciliation in 2 Corinthians 5 is pure Gospel in showing that the price has already been paid by God’s grace. There is no act or virtue to earn this forgiveness. Christ has earned it. “Therefore be reconciled.” That is another way of saying – Therefore, trust in this sacrifice.

Satan accuses us in vain when we realize what justification by faith means. As Luther said, Satan does not want a single drop of our blood. He wants to own our emotions. That is our weakest area. When we take up the cross because of the Word, Satan is there to say, “See how your loving God abandons you. Why not join the free and open spirits who prosper, instead of living in the dungeon with the dead orthodox?”

Or Satan accuses us because of sin, to make us feel we will never be worthy of forgiveness. The false teachers know how to play that tune and they jump in with full force, offering formulas for confidence in forgiveness – formulas involving the Law. You need a cell group. You need the double tithe. You need my counseling, which is both valuable and costly.

Luther said to tell Satan, “I may well be 1000 times worse than you say, but my Savior has paid the price for my sins. Go away.” Anxiety over sin and depression over sin can lead people into self-destructiveness, since they imagine themselves “no good anyway.” Many pastors make shipwrecks of their faith that way, whether in anger or depression or anxiety.
Posted by Ichabod the Glory Has Departed at 7:29 AM