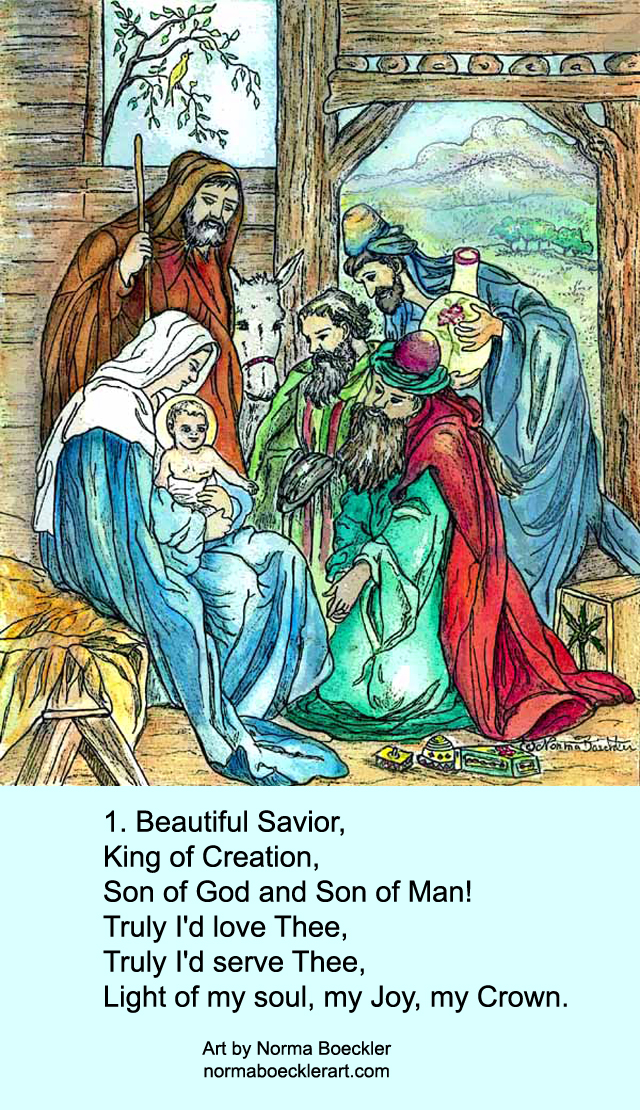 KJV Isaiah 9:2 The people that walked in darkness have seen a great light: they that dwell in the land of the shadow of death, upon them hath the light shined. 3 Thou hast multiplied the nation, and not increased the joy: they joy before thee according to the joy in harvest, and as men rejoice when they divide the spoil. 4 For thou hast broken the yoke of his burden, and the staff of his shoulder, the rod of his oppressor, as in the day of Midian. 5 For every battle of the warrior is with confused noise, and garments rolled in blood; but this shall be with burning and fuel of fire. 6 For unto us a child is born, unto us a son is given: and the government shall be upon his shoulder: and his name shall be called Wonderful, Counsellor, The mighty God, The everlasting Father, The Prince of Peace. 7 Of the increase of his government and peace there shall be no end, upon the throne of David, and upon his kingdom, to order it, and to establish it with judgment and with justice from henceforth even for ever. The zeal of the LORD of hosts will perform this.

KJV Luke 2:1 And it came to pass in those days, that there went out a decree from Caesar Augustus, that all the world should be taxed. 2 (And this taxing was first made when Cyrenius was governor of Syria.) 3 And all went to be taxed, every one into his own city. 4 And Joseph also went up from Galilee, out of the city of Nazareth, into Judaea, unto the city of David, which is called Bethlehem; (because he was of the house and lineage of David:) 5 To be taxed with Mary his espoused wife, being great with child. 6 And so it was, that, while they were there, the days were accomplished that she should be delivered. 7 And she brought forth her firstborn son, and wrapped him in swaddling clothes, and laid him in a manger; because there was no room for them in the inn. 8 And there were in the same country shepherds abiding in the field, keeping watch over their flock by night. 9 And, lo, the angel of the Lord came upon them, and the glory of the Lord shone round about them: and they were sore afraid. 10 And the angel said unto them, Fear not: for, behold, I bring you good tidings of great joy, which shall be to all people. 11 For unto you is born this day in the city of David a Saviour, which is Christ the Lord. 12 And this shall be a sign unto you; Ye shall find the babe wrapped in swaddling clothes, lying in a manger. 13 And suddenly there was with the angel a multitude of the heavenly host praising God, and saying, 14 Glory to God in the highest, and on earth peace, good will toward men. 15 And it came to pass, as the angels were gone away from them into heaven, the shepherds said one to another, Let us now go even unto Bethlehem, and see this thing which is come to pass, which the Lord hath made known unto us. 16 And they came with haste, and found Mary, and Joseph, and the babe lying in a manger. 17 And when they had seen it, they made known abroad the saying which was told them concerning this child. 18 And all they that heard it wondered at those things which were told them by the shepherds. 19 But Mary kept all these things, and pondered them in her heart. 20 And the shepherds returned, glorifying and praising God for all the things that they had heard and seen, as it was told unto them.

Full of Grace and Truth

KJV John 1:14 And the Word was made flesh, and dwelt among us, (and we beheld his glory, the glory as of the only begotten of the Father,) full of grace and truth.

Many concepts and traditions have accumulated around Christmas, but the most important one is condensed in this one verse.

Although John can repeated the simplest words for emphasis, the Evangelist can also summarize with the fewest words.

The Fourth Evangelist gave us the Little Gospel - John 3:16 -

KJV John 3:16 For God so loved the world, that he gave his only begotten Son, that whosoever believeth in him should not perish, but have everlasting life.

Christmas means that the eternal Son of God willingly took on our frail flesh, to be born of a Virgin. He lived among us, full of grace and truth.

Those are majestic, holy words - full of grace and truth.

Grace is a word often used, but what does it mean? Grace means God's love and forgiveness, offered freely through Christ.Therefore, the word carries the meaning of forgiveness and love, without human price or merit.

Although graciousness is a fine quality, we all have limits on that. A gracious person does not  have the power to grant forgiveness to people, but Christ freely offers this forgiveness to those who believe in Him.

His very arrival, His manifestation, was gracious. He did not come to us as a mighty warrior, as a vengeful god, but as a tiny child in a manger. How unlikely that was, and yet how appealing for everyone, even the tiniest child.

Whenever a baby is present among small children, they will say, even before they know how to say the word baby properly, "Look, a beebee." Adults look at the toddlers and laugh, because the toddlers are still babies to them. But to a toddler, a newborn baby is small, weak, and intriguing.

Jesus born amid the animals of a stable - that is also attractive to all people. The difference from ordinary births is so great that it must make an impression.

So God makes it easy to believe in Christ. The start of faith in Him can be the moment a baby is born, when the newborn begins to hear about the Gospel. Baptisms are delayed today by the travel of the extended family. No so long ago, baptism took place immediately because of health concerns and custom.

But one way or another, the baby hears the Gospel and believes. Caring parents keep up an atmosphere of Christian nurture and they get to see their children memorize the words and hear them repeat those words. We made Beatitude geometric shapes in Sunday School, to memorize each verse. I still remember that from 60 years ago. Sunday School teachers think they do not matter much and avoid the extra work, but it must mean something if it is remembered 60 years later.

God makes it easy for people to believe. He plants faith in our hearts through the Gospel Promises, which is the action of the Holy Spirit in the Word, not an act of will or intelligence.

He dwelt among us, full of grace and truth. The problem with truth is opposition to it. Wherever truth exists, there will be several kinds of opposition.

Our sinful flesh rebels against it, an automatic reaction. The vast majority of religions in this world are full of falsehoods, absurdities, and abuses. Their claims are simply crazy, but they have plenty of followers. The worse the claims, the greater the following.

One way or another, the Christian Faith is made to look bad, dangerous, reactionary, bigoted, or anti-intellectual. Therefore, a believer must spend a lifetime in a battle against his own inherent weaknesses and the assaults of unbelievers.

Nevertheless, those assaults are good for us in the long run. I know many Lutheran pastors and laity who comb the Scriptures, Confessions, and great old theology books to understand the attacks on justification by faith, the Chief Article of Christianity.

We do not value what we take for granted, the biggest danger to an entire society. I have seen the truth taken for granted in many different areas, so now those truths need to be defended with great energy rather than simply being taught.

That is political and historical. That can be repeated many times over in areas of revealed truth. Evolution has become the one way to explain everything - not Creation. Every religion (except Christianity) is considered good and worthwhile. Or - among the elite - all religion is bad and oppressive.

Simply to say that there is truth becomes a radical statement. I could publish in a lot of journals if I accepted modern philosophy as truth. I could promote books in Lutheran journals, magazines, and blogs if I trusted in synods rather than the Means of Grace.

But this verse goes far beyond saying, "There is truth." This verse means, "Jesus is truth. All truth is judged through Him alone. Anything else is falsehood."

Light was created by the Logos, the Word, the eternal Son of God. He created light, truth, before the sun and stars. Jesus said,


KJV John 8:12 Then spake Jesus again unto them, saying, I am the light of the world: he that followeth me shall not walk in darkness, but shall have the light of life.

Posted by Ichabod the Glory Has Departed at 7:36 AM