The Seventh Sunday after Trinity 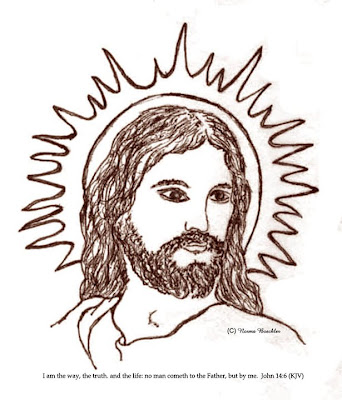 "I AM the way, and the truth, and the life."
By Norma Boeckler

The Seventh Sunday after Trinity


The Hymn #9 O Day of Rest 1:89
The Confession of Sins
The Absolution
The Introit p. 16
The Gloria Patri
The Kyrie p. 17
The Gloria in Excelsis
The Salutation and Collect p. 19
The Epistle and Gradual
The Gospel
Glory be to Thee, O Lord!
Praise be to Thee, O Christ!
The Nicene Creed p. 22
The Sermon Hymn #237 All Glory Be 1:12

Something Out of Nothing

KJV Romans 6:19 I speak after the manner of men because of the infirmity of your flesh: for as ye have yielded your members servants to uncleanness and to iniquity unto iniquity; even so now yield your members servants to righteousness unto holiness. 20 For when ye were the servants of sin, ye were free from righteousness. 21 What fruit had ye then in those things whereof ye are now ashamed? for the end of those things is death. 22 But now being made free from sin, and become servants to God, ye have your fruit unto holiness, and the end everlasting life. 23 For the wages of sin is death; but the gift of God is eternal life through Jesus Christ our Lord.
KJV Mark 8:1 In those days the multitude being very great, and having nothing to eat, Jesus called his disciples unto him, and saith unto them, 2 I have compassion on the multitude, because they have now been with me three days, and have nothing to eat: 3 And if I send them away fasting to their own houses, they will faint by the way: for divers of them came from far. 4 And his disciples answered him, From whence can a man satisfy these men with bread here in the wilderness? 5 And he asked them, How many loaves have ye? And they said, Seven. 6 And he commanded the people to sit down on the ground: and he took the seven loaves, and gave thanks, and brake, and gave to his disciples to set before them; and they did set them before the people. 7 And they had a few small fishes: and he blessed, and commanded to set them also before them. 8 So they did eat, and were filled: and they took up of the broken meat that was left seven baskets. 9 And they that had eaten were about four thousand: and he sent them away.

SEVENTH SUNDAY AFTER TRINITY
Lord God, heavenly Father, who in the wilderness didst by Thy Son abundantly feed four thousand men besides women and children with seven loaves and a few small fishes: We beseech Thee, graciously abide among us with Thy blessing, and keep us from covetousness and the cares of this life, that we may seek first Thy kingdom and Thy righteousness, and in all things needful for body and soul, experience Thine ever-present help; through Thy Son, our Lord Jesus Christ, who liveth and reigneth with Thee and the Holy Ghost, one true God, world without end. Amen.

Something Out of Nothing
This miracle teaches us many things, especially about how God creates something out of nothing, not just in the distant past, but even today.

If we study the Word carefully, we are protected against the nonsense which is taught and believed because people are unprepared.

As I mentioned before, this miracle is dismissed by moderns a number of different ways. One is that the Gospel writer is confused, writing up the same miracle twice, with two different numbers for the crowds.

In the New Testament era, writing and manuscripts were rare, so people had superb memories based on their lack of recording techniques. I am trying to imagine how the Evangelist could write up the “same” miracle twice and not identify his mistake.

It is clear that miraculous abundance accompanied Jesus. The Word of God shows Jesus creating the best wine from water at the wedding, miraculous catches of fish, and feedings of the multitude.

The rationalists have an explanation for this miracle. The rationalists have the crowd sharing their food, so this was a miracle of sharing. True, the boy with the food is not mentioned here, but the modernists blend things together and make their Biblical studies a creative writing seminar.

We can determine that no one was hiding food because they were with Jesus for three days. All the food was gone. In the desert, burning up calories, that was dangerous. Fainting along the way home was a real threat. Since the brain runs on blood sugar, a lack of food can lead to irrational behavior, which hastens death.

First of all we see the impossibility of food appearing from the crowd itself, and it is nowhere to be found where they are. Outside of a village, we could imagine some source of food, although I remember being admonished for ordering 30 sandwiches at once from a fast food place, because I did not warn them. Imagine 4,000 families and their need for food, outside any village or city. But they were in the desert.

Second, the text shows that Jesus had compassion on the crowd before anyone even asked for food.

2 I have compassion on the multitude, because they have now been with me three days, and have nothing to eat: 3 And if I send them away fasting to their own houses, they will faint by the way: for divers of them came from far.

This alone should remind us of God answering prayers before we even ask, especially concerning our material needs. That is always paramount for us, but God teaches us throughout the Word that He provides for all people, believers and unbelievers alike.

The ministry of the Word suppresses the Old Adam in us, so that many pitfalls of natural man are taken away, in spite of the fact that we are still sinful. The result of a God-pleasing life is going to be far more peaceful and balanced that someone who follows impulses of the moment. The celebrities, who are admired one moment, are arrested or put in addiction rehab the next. They mourn or brag about the millions they have squandered.

God is merciful and compassionate.

KJV Isaiah 65:24 And it shall come to pass, that before they call, I will answer; and while they are yet speaking, I will hear.

When Jesus announced His determination to help everyone, the disciples answered as true rationalists.

4 And his disciples answered him, From whence can a man satisfy these men with bread here in the wilderness?

Everyone knows that is impossible. There is nothing in the desert to provide for the multitude. I still read about people who imagine they can saw open a cactus and eat the pulp like watermelon, with water gushing out of the barrel cactus.

The disciples are offering the same objections we hear all the time, since our default attitude is rationalism. “This is impossible.”

Nothing is impossible with God, Who creates something out of nothing, through the Word.

Creation by the Word teaches us why this is so. The entire universe was called into being by the Word of God. All things were made through Him and nothing was made apart from Him. When God said, “Let there be light,” light came into existence, before the sun and stars were fashioned.

He spoke man into existence and filled the world with plants and animals to take care of man’s needs, including medicine – from the digitalis in foxglove to the penicillin mold living on bread. That ugly field weed is called deadly nightshade, related to the tomato, not good for animals to eat, but it contains belladonna, with medicinal properties used to treat stomach problems.

As believers, we do not need to ask how God arranged all this. We know it is true and that His gracious will only desires good for us.

No matter what we think or imagine, based on our knowledge and experience, God can and does accomplish miracles through the Word, for us personally, throughout our lives.

The most common, but overlooked miracle, is Holy Communion, where the Word consecrates the ordinary elements so that they are still bread and wine but also the body and blood of Jesus Christ. And there remains the greatest miracle, represented and offered by Holy Communion - the forgiveness of sins, justification by faith.

“Your righteousness must exceed that of the Scribes and Pharisees,” and it does – when we are justified by faith.

The declaration of forgiveness by the Word is even greater than Creation of the universe by the Word. The two go together, which is why we are called New Creations in the New Testament. (Often translated as new creatures, which hides the meaning a bit.)

One passage in the Bible informs us about other passages, because they all belong together in this singular doctrine of God. The Reformers preferred to use the singular term, so people did not thing there were rows and rows of “doctrines” where someone could chose one over the other, or emphasize one over the other.

Commonly, sectarians will emphasize one concept at the expense of all others. They may spend all their time on the return of Christ. Or they may have a new table of commandments to follow. Their lack of balance in showing the entire doctrine of God shows that they are cafeteria believers. They slide their tray along the line and pick out what they like and leave the rest, sometimes calling it the “whole Gospel.”

The abundance is this miracle is even greater than the original feeding, because so many fragments are leftover when people have completely filled themselves, after being famished.

When we worry about God’s grace in forgiving our sins, there is more than enough, a great abundance of His mercy. There is so much forgiveness in the Gospel that it overflows to many others around us.

When we are anxious about how He will take care of us, there is more than enough, and plenty to share as well.
Posted by Ichabod the Glory Has Departed at 7:18 AM