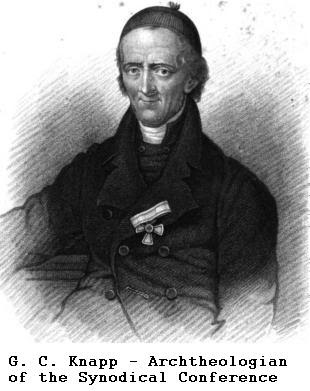 George Christian Knapp, Halle Pietist, still in print today.
Are those bees flying around his head?

Knapp's Halle lectures were first read in 1789, so we have the remnants of the Synodical Conference using a formula from a Pietistic book translated in 1833 but written 40 years before. Knapp was a standard Protestant theology book throughout the 19th century and remains in print today.

Walther started in 1847, although Loehe really began the Missouri Synod. Can we believe that Walther had no knowledge of Knapp in German, when Walther himself was a Pietist?

The great scandal of Midwestern Lutheranism comes from their anti-Luther Pietism embodied in Woods' double-justification scheme.

Anything else is Calvinism to them, and that proves how little they know about Christian doctrine.

Posted by Ichabod the Glory Has Departed at 9:10 PM

Email ThisBlogThis!Share to TwitterShare to FacebookShare to Pinterest
Labels: UOJ