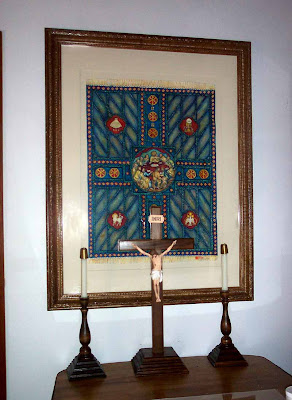 KJV Mark 14:36 And he said, Abba, Father, all things are possible unto thee; take away this cup from me: nevertheless not what I will, but what thou wilt.

KJV Romans 8:15 For ye have not received the spirit of bondage again to fear; but ye have received the Spirit of adoption, whereby we cry, Abba, Father.

KJV Galatians 4:6 And because ye are sons, God hath sent forth the Spirit of his Son into your hearts, crying, Abba, Father.

The harmony we find in these passages comes from the work of Christ. He became our brother so that we would be adopted into the family, into the Kingdom of God.

That is spelled out in John’s Gospel, which is so much like a running commentary on the first three Gospels.

KJV John 1:10 He was in the world, and the world was made by him, and the world knew him not. 11 He came unto his own, and his own received him not. 12 But as many as received him, to them gave he power to become the sons of God, even to them that believe on his name: 13 Which were born, not of blood, nor of the will of the flesh, nor of the will of man, but of God. 14 And the Word was made flesh, and dwelt among us, (and we beheld his glory, the glory as of the only begotten of the Father,) full of grace and truth.


The Synodical Conference MDivs want to lecture everyone on the shortcomings of faith, but John’s Gospel teaches the opposite of their opinion. There is an interesting verse here, because two verbs are used in parallel, which is common in Hebrew. One verb explains the other.

“as many as received Him”
and
“even to them that believe on His Name.”

The Word of God is consistently monergistic, that is, it always glorifies God in divine activity. The Gospel Promises convert people to faith and sustain people in their faith, both through the Word and the Sacraments.

The Holy Spirit opens the heart to receive Christ. Receiving Christ is the concept parallel to believing. God acts through the Word and the individual receives what God offers so freely. And God continues to patiently offer His grace to all people. Nevertheless, some obstinately oppose the Word while others believe for a time and turn away for various bad reasons (Matthew 13 and Mark 4, Parable of the Sower).

Those who believe in Christ, according to John, have the right to become children of God. John 1:7 makes it abundantly clear that receiving equals believing.

KJV John 1:7 The same came for a witness, to bear witness of the Light, that all men through him might believe.

This means that we are included in God’s family, as brothers of Christ, when we pray that prayer which He taught His disciples as the example all should follow.

As many have heard, the term “Abba” is a term of endearment never found in Hebrew for addressing God.

Because Jesus is the only-begotten Son of God, He addresses God the Father as “Abba” – dear Father. Every language and dialect has a similar term, and many families use their own favorite term, whether papa, father dear, or daddy, or pops. Ethnic groups have their own favorite terms of endearment, too. All of them are different from solemn usage, so this never translates very well.

In Galatians and Romans are two examples of Paul calling upon that very term Abba. In other words, when we pray to God at any time, we are praying just like Jesus, addressing Him as Abba – Dear Father.

One reminds us of being adopted (monergism). The other teaches us about the Spirit helping us to pray. As I have mentioned before, Paul’s admonitions to pray are always accompanied by Gospel Promises, something we also find in the Gospels themselves.

John 15:7 If ye abide in me, and my words abide in you, ye shall ask what ye will, and it shall be done unto you. 8 Herein is my Father glorified, that ye bear much fruit; so shall ye be my disciples. 9 As the Father hath loved me, so have I loved you: continue ye in my love.

In this prayer from Mark 14, Jesus prayed to have the cup pass from Him, to escape the terrible torture, abandonment, and death that awaited Him. Here we see His human nature, because the fear alone of such death scattered the disciples. Jesus is an example of prayer, because He did not equate prayer with a demand, but said – Not my will, but yours.

All these passages uniting the word Abba with prayer teach the same thing – that we are children of God and brothers of Christ through faith in Him. God listens to us as He does to His only-begotten Son. He knows us by name and listens to each one of us, giving us the standing of His Son. And we listen to His wisdom through the teaching of the Scriptures, saying, “Not my will, but yours.”

Posted by Ichabod the Glory Has Departed at 4:45 PM