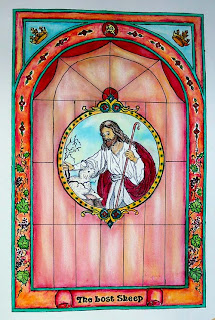 
The Hymn #657 Beautiful Savior 4:24
The Confession of Sins
The Absolution
The Introit p. 16
The Gloria Patri
The Kyrie p. 17
The Gloria in Excelsis
The Salutation and Collect p. 19
The Epistle and Gradual
The Gospel
Glory be to Thee, O Lord!
Praise be to Thee, O Christ!
The Nicene Creed p. 22
The Sermon Hymn # 364 How Sweet the Name 4:18


KJV Joel 2:12 Therefore also now, saith the LORD, turn ye even to me with all your heart, and with fasting, and with weeping, and with mourning: 13 And rend your heart, and not your garments, and turn unto the LORD your God: for he is gracious and merciful, slow to anger, and of great kindness, and repenteth him of the evil. 14 Who knoweth if he will return and repent, and leave a blessing behind him; even a meat offering and a drink offering unto the LORD your God? 15 Blow the trumpet in Zion, sanctify a fast, call a solemn assembly: 16 Gather the people, sanctify the congregation, assemble the elders, gather the children, and those that suck the breasts: let the bridegroom go forth of his chamber, and the bride out of her closet. 17 Let the priests, the ministers of the LORD, weep between the porch and the altar, and let them say, Spare thy people, O LORD, and give not thine heritage to reproach, that the heathen should rule over them: wherefore should they say among the people, Where is their God? 18 Then will the LORD be jealous for his land, and pity his people. 19 Yea, the LORD will answer and say unto his people, Behold, I will send you corn, and wine, and oil, and ye shall be satisfied therewith: and I will no more make you a reproach among the heathen:

KJV Matthew 6:16 Moreover when ye fast, be not, as the hypocrites, of a sad countenance: for they disfigure their faces, that they may appear unto men to fast. Verily I say unto you, They have their reward. 17 But thou, when thou fastest, anoint thine head, and wash thy face; 18 That thou appear not unto men to fast, but unto thy Father which is in secret: and thy Father, which seeth in secret, shall reward thee openly. 19 Lay not up for yourselves treasures upon earth, where moth and rust doth corrupt, and where thieves break through and steal: 20 But lay up for yourselves treasures in heaven, where neither moth nor rust doth corrupt, and where thieves do not break through nor steal: 21 For where your treasure is, there will your heart be also.

Quinquagesima Sunday
Lord God, heavenly Father, who didst manifest Thyself, with the Holy Ghost, in the fullness of grace at the baptism of Thy dear Son, and with Thy voice didst direct us to Him who hath borne our sins, that we might receive grace and the remission of sins: Keep us, we beseech Thee, in the true faith; and inasmuch as we have been baptized in accordance with Thy command, and the example of Thy dear Son, we pray Thee to strengthen our faith by Thy Holy Spirit, and lead us to everlasting life and salvation, through Thy beloved Son, Jesus Christ our Lord, who liveth and reigneth with Thee and the Holy Ghost, one true God, world without end. Amen,


Where Is Our Treasure?
Matthew 6: 19 Lay not up for yourselves treasures upon earth, where moth and rust doth corrupt, and where thieves break through and steal: 20 But lay up for yourselves treasures in heaven, where neither moth nor rust doth corrupt, and where thieves do not break through nor steal: 21 For where your treasure is, there will your heart be also.

The Sermon on the Mount is full of concentrated wisdom from the Savior. Movies about Jesus often have Him delivering this message. In this Gospel lesson alone we have material for two different sermons or two different books.

Jesus gave us a brief and often-overlooked parable about treasure buried in a field:

KJV Matthew 13:44 Again, the kingdom of heaven is like unto treasure hid in a field; the which when a man hath found, he hideth, and for joy thereof goeth and selleth all that he hath, and buyeth that field.

The origin of buried treasure was the lack of banks. If someone went on a journey or feared an enemy invasion, he buried his treasure in a field or under his home. For that reason, there were always stories of lost gold or suddenly found fortunes.

This passage is also overlooked, or read as if it said, “Lay up for yourselves treasures on earth.”

The reason why so many crimes are committed or false doctrine spread is money.

Crime – the professor who killed three colleagues and wounded others. She shot her brother twice with a shotgun, but her parents’ wealth got the charges dropped, the evidence erased, and an emotional time-bomb sent into academic life.

False doctrine – because it belongs to Satan’s realm, it is blessed by plenty of money. If not, the prosperity coming from the Gospel eventually attracts enough wealth to subvert the Gospel and endow evil. One of the most conservative churches in America became the one of the worst because endowments made it possible – Glide Memorial in San Francisco.

An advantage of seniority is having a perspective. A teaching colleague said to me, “I lost $280,000 from my pension fund, so I will keep teaching.” He was 71. I said, “It’s only money and teaching is fun.”

There have been many bubbles in the past. I once read a history of banking in America. The author loved the Federal Reserve and thought it was the answer to all our problems with bubbles. I read that while the real estate bubble was forming. Throughout history, fortunes have appeared and vanished. Whatever something is worth – that can change overnight. The biggest private estate deal in the world went sour because the Russian mobster who bought the estate ran out of money – and demanded his deposit back. The largest real estate deal in America, apartments in NYC, has become the biggest bust in history.

I gave away one of my favorite novels, where a dandy from Paris posed at the fireplace, looking down on his country cousins for being so plain and unfashionable. At that moment he was completely without funds, but he did not know it. At the same time, his prospective bride was on her way to becoming one of the richest people in the land, because her father was such a miser and left her everything. And yet the novel begins with the ruin of that entire estate, to show us that all the struggles about money ended up with no one left and the house empty. Lay not up for yourselves treasures on earth.

Moby Dick has a hilarious passage where the misery ship owners bargain poor Ishmael down by quoting this passage, which is a pun in the book. A “lay” is a percentage of the cargo. Since whale hunting was like searching for gold, the rewards could be vast for the owners and those having a share or a lay. Ishmael got very little in the hiring contract, but that did not matter since the whale attacked the ship and all hands were lost – except for the narrator. They were debating over something that did not last, that did not even make it to a safe harbor.

Like Ishmael, Newton (author of Amazing Grace) was stranded at sea in a shipwreck, only that cargo allowed him to live. The barrels were so buoyant that they made great life preservers. Newton repented of his evil life, became a minister, and wrote famous hymns.

19 Lay not up for yourselves treasures upon earth, where moth and rust doth corrupt, and where thieves break through and steal.

This is a great summary of the transitory nature of wealth. Clothing can be very expensive. We see examples of that on TV, but vermin will destroy anything over time. Even carefully preserved articles of clothing will decay. If something valuable lasts, such as diamonds and gold, thieves steal it.

Luther’s dissertation on money was that it was a weak god. It is so weak that it must be protected with fences, locks, iron safes, and armed guards. Money is such a weak god that it cannot even cure an illness. One of our famous Lutherans, Steve Jobs, is turning into a skeleton as disease robs him of his health. All the money in the world cannot cure that.

20 But lay up for yourselves treasures in heaven, where neither moth nor rust doth corrupt, and where thieves do not break through nor steal: 21 For where your treasure is, there will your heart be also.

We should instead lay up our treasures in heaven, where nothing corrupts and thieves do not steal.

How do we do that?

First of all we place all our trust in the Word of God. The Gospel is repeatedly called a treasure in the Book of Concord, as Jesus clearly teaches in this lesson and the parable in Matthew 13. This treasure is so great that a man sold all he had to obtain the field with the treasure in it.

The comparison is clear. All that we have is less valuable than that place where the Promises of God, the real treasure can be found. The Word is far more precious than all our goods combined.

Most clergy would say they agree with this passage, but they put money before the Gospel in all their decisions. They cannot afford the financial penalty of fighting against error, so they go silent, or worse – go out of their way to curry favor by undermining anyone who would sound the alarm.

The effect of silence or collusion is guaranteed – it hardens the heart. So in the name of the institution the Gospel is lost and the official proclaimers of the Gospel lose themselves in the process.

Posted by Ichabod the Glory Has Departed at 6:39 AM