The Second Sunday after Trinity, 2022

O Lord, I have trusted in Thy mercy:
my heart shall rejoice in Thy salvation.
I will sing unto the Lord:
because He hath dealt bountifully with me.
Psalm. How long wilt Thou forget me, O Lord?
How long wilt Thou hide Thy face from me?
The Gloria Patri
The Kyrie p. 17
The Gloria in Excelsis
The Salutation and Collect p. 19
Collect
O God, the Strength of all them that put their trust in Thee,
mercifully accept our prayers; and because through the weakness of our mortal nature we can do nothing without Thee, grant us the help of Thy grace that in keeping Thy commandments we may please Thee both in will and deed;
through Jesus Christ, Thy Son, our Lord, who liveth, etc.
The Epistle and Gradual
Gradual
I said, Lord, be merciful unto me: heal my soul,
for I have sinned against Thee.
V. Blessed is he that considereth the poor:
the Lord will deliver him in time of trouble.
Hallelujah! Hallelujah!
V. Give ear to my words, O Lord: consider my meditation. Hallelujah!
The Gospel
Glory be to Thee, O Lord!
Praise be to Thee, O Christ!
The Nicene Creed p. 22
The Sermon Hymn #207     Like the Golden Sun Ascending
Why the World Hates
The Communion Hymn #277   I Heard the Voice of Jesus
The Preface p. 24
The Sanctus p. 26
The Lord's Prayer p. 27
The Words of Institution
The Agnus Dei p. 28
The Nunc Dimittis p. 29
The Benediction p. 31
The Hymn #411                        From Eternity O God 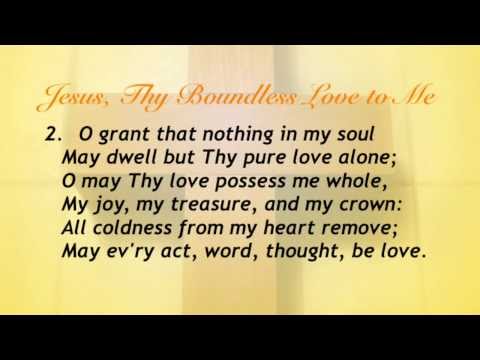 In Our Prayers
KJV 1 John 3:13 Marvel not, my brethren, if the world hate you. 14 We know that we have passed from death unto life, because we love the brethren. He that loveth not his brother abideth in death. 15 Whosoever hateth his brother is a murderer: and ye know that no murderer hath eternal life abiding in him. 16 Hereby perceive we the love of God, because he laid down his life for us: and we ought to lay down our lives for the brethren. 17 But whoso hath this world's good, and seeth his brother have need, and shutteth up his bowels of compassion from him, how dwelleth the love of God in him? 18 My little children, let us not love in word, neither in tongue; but in deed and in truth.
KJV Luke 14:16 Then said he unto him, A certain man made a great supper, and bade many: 17 And sent his servant at supper time to say to them that were bidden, Come; for all things are now ready. 18 And they all with one consent began to make excuse. The first said unto him, I have bought a piece of ground, and I must needs go and see it: I pray thee have me excused. 19 And another said, I have bought five yoke of oxen, and I go to prove them: I pray thee have me excused. 20 And another said, I have married a wife, and therefore I cannot come. 21 So that servant came, and shewed his lord these things. Then the master of the house being angry said to his servant, Go out quickly into the streets and lanes of the city, and bring in hither the poor, and the maimed, and the halt, and the blind. 22 And the servant said, Lord, it is done as thou hast commanded, and yet there is room. 23 And the lord said unto the servant, Go out into the highways and hedges, and compel them to come in, that my house may be filled. 24 For I say unto you, That none of those men which were bidden shall taste of my supper.
Second Sunday After Trinity
Lord God, heavenly Father, we give thanks unto Thee, that through Thy holy word Thou hast called us to Thy great supper, and we beseech Thee: Quicken our hearts by Thy Holy Spirit, that we may not hear Thy word without fruit, but that we may prepare ourselves rightly for Thy kingdom, and not suffer ourselves to be hindered by any worldly care, through Thy beloved Son. Jesus Christ, our Lord, who liveth and reigneth with Thee and the Holy Ghost, one true God, world without end. Amen. 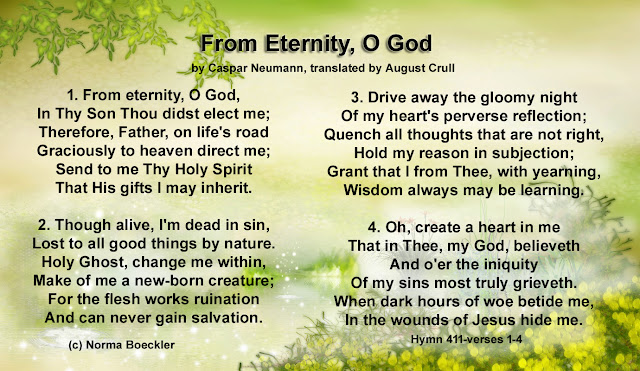 Why the World Hates
KJV 1 John 3:13 Marvel not, my brethren, if the world hate you. 14 We know that we have passed from death unto life, because we love the brethren. He that loveth not his brother abideth in death.
Introduction
Luther's sermon on this passage includes the verses just before 1 John 3:13 - about Cain killing Abel. That serves as an allegory of the world hating Christian believers. Cain was haughty and wanted all the glory of his works. However, when the two brothers offered their sacrifices, God honored Abel's because of the man's faith and humility. God did not honor Cain's because of Cain's pride and lack of faith in God.

1 John 3: 11 For this is the message that ye heard from the beginning, that we should love one another.
1 John 3:12 Not as Cain, who was of that wicked one, and slew his brother. And wherefore slew he him? Because his own works were evil, and his brother's righteous.

This is now being played out in America, and echoed throughout the unbelieving world. Protecting the unborn enrages unbelievers, who respond by destroying buildings where people are counseled about keeping the unborn child.

I volunteered at a pro-life center in Columbus. Of all the young women I met there, only one came with the prospective father of the child. All the rest came alone, except for the married couple hoping a child was on the way. Where were all the teen-age boys? They were never along.

We live in a world where the righteousness of works has taken over, not only disconnected from the concept of God (Natural Law - God commands what is good for us - basic to the US Constitution) but antagonistic toward anything Christian. Therefore, the highly praised works are not derived from God's Commandments but from the destructive power of Satan. Cain belonged to Satan, so he hated Abel. Thus, the works become more destructive because of this power.

John's Gospel and Letters state clearly that the unbelieving world will hate Christians just as they hated Jesus Christ. Nothing is too absurd and destructive for this generation, so we should not be filled with wonder ("do not marvel") that the world hates Christians since that has been a theme since the very beginning.

And it is important to discern that Cain and Abel were brothers, that opposition and hatred are not simply from enemies far away but also from the incense-scented halls of the visible church. We find the opposition in the Church of Rome and in the denominations (Lutherans too) that hate the teaching of their founders and do their best to show their unChristian works to the world.

We should expect that the world hates us for loving the Gospel Word, which includes the Bible in its various parts and the whole. No one can water down the Scriptures enough to please unbelievers, sceptics, and rationalists. When I sit in the garden to work on the flowers and weeds, I am surrounded by creatures, even a bunny walking casually by, not by evolutes.

We know we belong to the invisible Christian Church because we love those who are also believers. That tie unites a bewildering variety of people drawn by the Word.

He that loveth not his brother abideth in death.

Many can carry on with the outward signs of the Christian Church, which vary in a hundred different ways. But when the unbeliever is loyal to his Father Below, he works against the Gospel and persecutes the believer. The radicals took over ELCA starting in 1987 and completed the victory in 2009, driving out several million members and pastors. The radicals will never let go of their prize, and yet WELS-LCMS-ELS will continue to work with them for the Thrivent money.

15 Whosoever hateth his brother is a murderer: and ye know that no murderer hath eternal life abiding in him.

The two go together. When people are proud and haughty, obsessed with keeping what they have and the honors they think they deserve, they do their best to crush their opposition, very much like Cain and Abel. Here John is using the same term that Jesus did in John 8.

Man-murderer (ανθρωποκτονος) is the very word that Jesus used with reference to the devil in John 8:44; it applies to all the devil’s children (v. 10b); included among these are the antichristians who have gone out from us (2:19). John has called the latter liars (1:6, 10; 2:22) and combines liar and man-murderer as Jesus does in John 8:44.

Faith and eternal life go together. Expressing one is proclaiming the other. I have found that the "conservative" Lutherans will do everything possible to promote universal forgiveness without faith and to condemn and silence Justification by Faith in Jesus Christ. I noticed that two "conservative" graduates of the Jesuit Marquette University (John Brenner, WELS, and Gregory Schulz, LCMS) write about the "justification of the world," as if every person is forgiven, no matter what. Everyone who writes for Christian News promotes this anti-Scriptural dogma and anyone who teaches Justification by Faith is excommunicated. Ask me how I know.

This is what we see in secular life. There are trigger-words and snares that catch anyone who is pro-life, or can only count to two with genders, etc. The watchers keep track of terms they do not like and silence those people, one way or the other. The "goals" are scared to them, so when something new "aligns with our goals," any offense means automatic dismissal.

16 Hereby perceive we the love of God, because he laid down his life for us: and we ought to lay down our lives for the brethren.

This was automatic in the Apostolic Church. Because Jesus gave up His life, the believers gave up theirs. False brothers fell away, and it is easy to see why, but the martyrs increased the numbers across the known world. Now we do not have "laying down our lives" but "lifting a finger," and hardly a finger is lifted. The official charities do some of the works, but the most important efforts should be for our next-door neighbor or relative.

17 But whoso hath this world's good, and seeth his brother have need, and shutteth up his bowels of compassion from him, how dwelleth the love of God in him? 18 My little children, let us not love in word, neither in tongue; but in deed and in truth.

Some might say, "This is a passage about works," but it is really about the fruit of the Spirit, works that naturally grow from the Gospel taught and believed. Years ago, in the LCA, a bunch of members agreed to visit and spend time in the home for handicapped adults. Only one or two actually did. I was one. The other person had a chronic and fatal disease and died young. She always visited Erin Joy too and had so much fun with her. I often felt sorry for those who never stopped to be with life-long handicapped people. 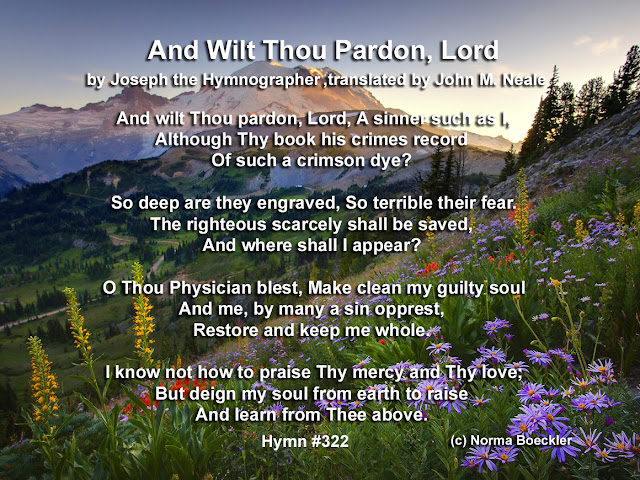 Posted by Ichabod the Glory Has Departed at 7:40 AM