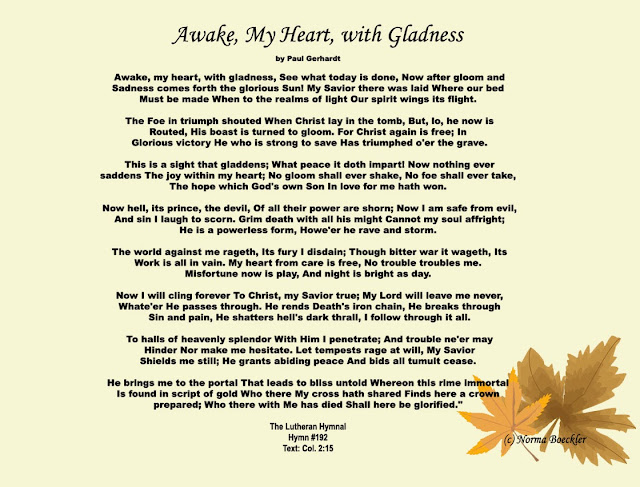 Armor of Light and Truth

KJV Romans 13:11 And that, knowing the time, that now it is high time to awake out of sleep: for now is our salvation nearer than when we believed. 12 The night is far spent, the day is at hand: let us therefore cast off the works of darkness, and let us put on the armour of light. 13 Let us walk honestly, as in the day; not in rioting and drunkenness, not in chambering [immorality] and wantonness, not in strife and envying. 14 But put ye on the Lord Jesus Christ, and make not provision for the flesh, to fulfil the lusts thereof.


First Sunday in Advent - The Collects of Veit Dietrich
Lord God, heavenly Father, we thank Thee, we bless and praise Thee forever, that Thou didst send Thy Son to rule over us poor sinners, who for our transgressions did justly deserve to remain in the bondage of sin and Satan, and didst give us in Him a meek and righteous King, who by His death became our Savior from sin and eternal death: We beseech Thee so to enlighten, govern and direct us by Thy Holy Spirit, that we may ever remain faithful to this righteous King and Savior, and not, after the manner of the world, be offended with His humble form and despised word, but, firmly believing in Him, obtain eternal salvation; through the same, Thy beloved Son, Jesus Christ, our Lord, who liveth and reigneth with Thee and the Holy Ghost, one true God, world without end. Amen.

The revelation of God, which is received only through faith, means that there is only one truth.  In some areas of thought, people realize this. If there is a crime, there can only be one accurate depiction of it. The crime did not have three different ways or two ways, but only one way.
With more complicated issues, people find many explanations, such as why Napoleon lost the Battle of Waterloo. When I listed four explanations, a student offered a fifth one. That is what makes history interesting – there are no lasting answers.
In contrast, the revelation of the truth is fixed and unchanging. The truth does not depend upon man’s understanding or acceptance. It does not have to be reasonable or appealing to mankind, because the truth belongs to God alone.
KJV Romans 13:11 And that, knowing the time, that now it is high time to awake out of sleep: for now is our salvation nearer than when we believed.
We do not know when the end of time will take place, but Paul reveals it is getting closer ever day – all the more reason to awake out of sleep. This is a way of contrasting weariness with the need to be alert.
Everyone gets tired of the battle. About 2400 years ago one Athenian leader warned that a democracy will always get tired of a battle and want to give up. There are many current examples of that in dealing with sound doctrine, and everyone feels it besides.
In the ancient world and in modern times, sleep and exhaustion are times when bad things happen. In fact, it has been shown that sleep deprivation is more dangerous than alcohol intoxication.
Salvation is closer at hand, not receding away. That is motivation to stay awake, to wake up, and be watchful. Gregory is taken from the Greek word for watchman, since the watchman has to remain alert.
When Jesus said, “Watch and pray,” it could also be translated as “Stay awake and pray, for you know not the hour…”

12 The night is far spent, the day is at hand: let us therefore cast off the works of darkness, and let us put on the armour of light.

If we look at the history of our young planet, the time before the full revelation of Christ was 4000 years. The advent of the Gospel, fully revealed, was just beginning in Paul’s time and ready to sweep the entire Roman Empire, turning a pagan world power into a Christian one (more or less). It is significant that even as the Western Roman Empire faded, the Eastern part thrived and continued until the Renaissance. Christianity is the largest world religion, if we can believe the numbers. While people are letting go of the Gospel in the First World, they are spreading it in the Third World.
The Second Coming is a poor time to give up on the truth and participate in the works of darkness, which are numbered below. In ancient times, night was exceptionally black, inside and out. Illumination was sparse, so temptation was that much greater. Even in a royal palace, lighting at night was not the rule, as shown by stories from the past.
That is why children will have trouble with Judas identifying Jesus, when we can see so well at night in most locations.
Darkness, temptation, and evil are associated together, just as truth and light are.
God created “light” before the lights – the sun and the stars. Truth is God’s creation, not so much man’s discovery (as the rationalists imagine).
So truth is the armor of light. When people despair, they are living in darkness and misunderstanding because all who believe in the Only-Begotten Son of God are forgiven and saved. Through faith we have access to God’s grace and favor, God’s forgiveness and salvation.
Knowing there is truth – God’s truth – keeps us from temptation and error, especially the soul-destroying error of false doctrine.  The Wauwatosa theologians bragged they could dabble in false doctrine, starting over without the Confessions, as if they were spiritually wiser than Luther, Melanchthon, and Chemnitz combined. Those same theologians would be appalled at the bitter and toxic fruit that has grown from those seeds of rebellion and falsehood.
So, for instance, common denials of the truth can easily be dismissed by someone well trained in the truth. That used to be so – but less so lately. For instance, one popular movie about Jesus showed Him as only a man. One member, at another church, wanted to see The Last Temptation of Christ. I sent a movie review and asked, “Is this what you want to see?” I never saw the movie but I knew from the review it was obscene. She chose not to go because it featured a false picture of Christ.
A false view of Christ, which is typical of 2/3rds of all attacks on the Faith, will give a false view of forgiveness and salvation.
A false view of God’s goodness will make someone worried and anxious about the future. I asked one man how God could create the world and send His Son to die for his sins, yet neglect to feed and shelter his family.
The revealed Word of God is that armor that keeps falsehood away and deflects the arrows of Satan from piercing our hearts.
13 Let us walk honestly, as in the day; not in rioting and drunkenness, not in chambering [immorality] and wantonness, not in strife and envying. 14 But put ye on the Lord Jesus Christ, and make not provision for the flesh, to fulfil the lusts thereof.
Many people mislead themselves with a false view of the truth. They believe the Gospel is an excuse to do whatever they want so they can plead forgiveness and grace while they continue without repentance.

That very deception leads to despising the Word, because the truth bears down on falsehood and makes forms of unbelief painful, until people dull their hearts and harden them against the truth. Then they become blind to the truth of God’s Word and purveyors of falsehood. The obvious examples are all around us, but the more subtle ones are more dangerous:

Putting on Christ is a reference to the baptismal robe which is worn. The robe makes us all one in Christ, because we put on His righteousness to cover up our mortality, our failings, our sin.

This is the righteousness of faith. All believers in Christ can call themselves righteous, forgiven and saved, rejoicing in His righteousness rather than their own. 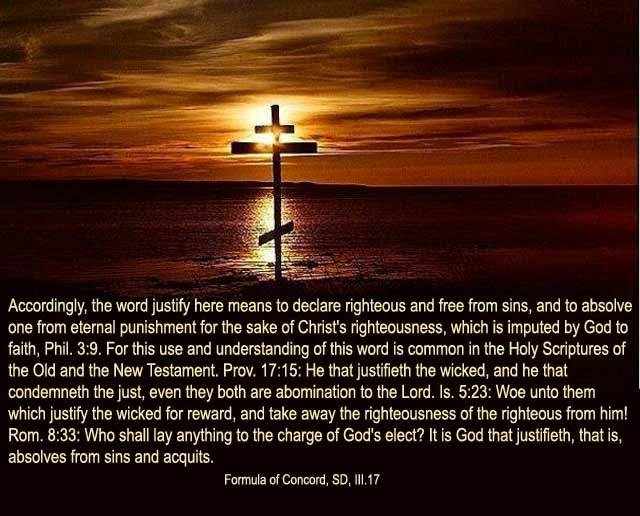