Marine reflects on being the voice of Bambi - Houston Chronicle 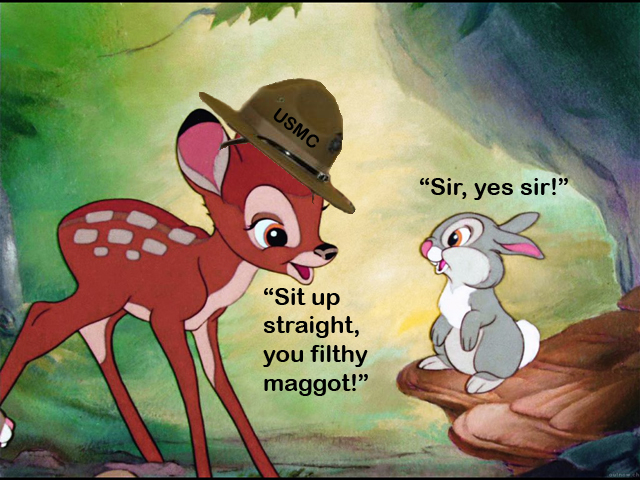 Marine reflects on being the voice of Bambi - Houston Chronicle:


After decades of silence, a tough Marine has come forward with his clean little secret: He's the voice of Bambi.

San Antonio native Donnie Dunagan, now of San Angelo, was 6 when Walt Disney hired him to be the model and voice of the fawn in the 1942 animated classic, which debuted on DVD last week.

During his entire military career, Dunagan never confided to colleagues about being in Bambi.

"I was blessed to be in a leadership role for 25 years, either in counterintelligence or training troops," Dunagan said, "and if these animals I was leading had ever found out about Bambi — as much affection as I had for it — they'd have ridden me out on a rail."

Since he's come forward, though, he's taking renewed pride in his role.

"I go down the street now, and when some old Marine who knew me before yells, 'Hey, Major Bambi!' I love it to death," Dunagan said.

Dunagan made eight movies as a child after being discovered at a Memphis, Tenn., talent show. They included 1939's Son of Frankenstein with Boris Karloff and Tower of London with Basil Rathbone. But his career ended when his family fractured. He wound up in boarding homes, then joined the military as a teen.

Dunagan distinguished himself in the service. The curly-haired lad with the Southern drawl whom Karloff had hoisted on a monster's shoulder became the youngest Marine drill instructor ever. A boxer and devoted Harley rider, Dunagan served three tours in Vietnam and was wounded several times.

After leaving the Marines in 1977, he worked in business and kept mum about his childhood stardom, even as fans scoured phone books for him.

But Dunagan was nailed last June. A casual comment at a San Angelo banquet tipped off a local TV crew that they had a star in their midst.

Dunagan, 70, and Dana, his wife of 13 years, had moved to the town two years before so his stepson could attend college there. Only after his story came out "did we open the old boxes I'd sealed for 50 years, with newspaper clippings about my time in Bambi."

Disney contacted him soon after about participating in a DVD of Bambi. Dunagan appears in a featurette about the cast, then and now. He was always fond of the film and showed videocassettes of it to children whenever he could. Now he's getting DVD copies from Disney to give to orphanages.

Having come to terms with it, the Marine who was Bambi finally is speaking up.

This year Dunagan will make his first appearances at film fan conventions, to meet admirers and sign autographs.

"His autograph hasn't been out there since he was 4 or 5," said Donna Lucas, publisher — with husband Tim Lucas — of Video Watchdog, which ran a cover story on Dunagan in October.

Fans are ecstatic that he's finally come forward, she said. "This is one of the last living people who worked with Karloff, and he's got an incredible memory."

Though Dunagan loathes self-promotion, he finally allowed his wife to launch a Web site, www.donniedunagan.com, where he shares happy memories of kidding with Karloff and roaming Disney's studio.

"Mr. Disney was a positive, real leader. He was all over, doing everything. He had his sleeves rolled up, and people respected him and were happy.

"I knew there were phonies in show business, but not there, not at Disney. I think Mr. Disney was a pioneer — as a humanist, an environmentalist and an artist."

Disney encouraged naturalism in the kids. For a scene in which Bambi grimaces after being kissed by young deer Faline, "He told me to pretend I'd taken castor oil and make a face," Dunagan said. "I had to hold expressions of fear, happiness, joy or anger while the artists drew it."

He credits Disney for hiring children to voice small animals, instead of casting adults who'd use childlike voices. To this day, Dunagan hasn't met his co-stars, who recorded their lines separately.

Dunagan saw Bambi before its original release and was surprised by its most notorious scene: when Bambi's mother is killed by hunters off-screen.

"That was the only thing that bothered me," he said. "Nobody told me when I recorded the line 'Mother! Mother!' what it was about. But back then, there was a war going on, and a lot of children's mothers were dying. I think it was very, very smart to have it happen off-camera."

Dunagan is semiretired today. He lost his savings in the Enron debacle and has been tutoring and "doing what I can do." He says he'd "give you push-ups in the street" to get back into show business, as a performer or a technical adviser.

And the tough guy from Texas has a special place in his heart for the tender Bambi.

"Is there any incongruity in being a tough old Marine and loving Bambi? No, no," Dunagan said.

"I'm a sensitive man. When I had my first casualties as a lieutenant, I had a hard time controlling my emotions, but I had a strong sergeant with me who kept me from doing something stupid.

"I've been around some real tough guys, and I promise you on my honor: The strongest guys I've known in life would pick up a wounded baby kitty on the side of the road. Yet you wouldn't want to go against them in combat. That is not inconsistent. It is part of the same ethos."


'via Blog this'
Posted by Ichabod the Glory Has Departed at 7:45 PM