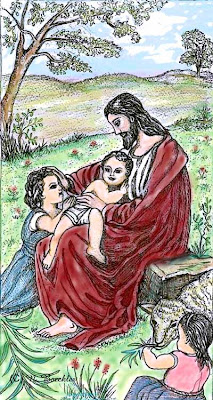 Unless you believe as a child, you will not enter the Kingdom of God. Norma Boeckler.

KJV Psalm 47:
1 O clap your hands, all ye people; shout unto God with the voice of triumph.
2 For the LORD most high is terrible; he is a great King over all the earth.
3 He shall subdue the people under us, and the nations under our feet.
4 He shall choose our inheritance for us, the excellency of Jacob whom he loved. Selah.
God is gone up with a shout, the LORD with the sound of a trumpet.
6 Sing praises to God, sing praises: sing praises unto our King, sing praises.
7 For God is the King of all the earth: sing ye praises with understanding.
8 God reigneth over the heathen: God sitteth upon the throne of his holiness.
9 The princes of the people are gathered together, even the people of the God of Abraham: for the shields of the earth belong unto God: he is greatly exalted.


KJV Acts 1:1 The former treatise have I made, O Theophilus, of all that Jesus began both to do and teach, 2 Until the day in which he was taken up, after that he through the Holy Ghost had given commandments unto the apostles whom he had chosen: 3 To whom also he shewed himself alive after his passion by many infallible proofs, being seen of them forty days, and speaking of the things pertaining to the kingdom of God: 4 And, being assembled together with them, commanded them that they should not depart from Jerusalem, but wait for the promise of the Father, which, saith he, ye have heard of me. 5 For John truly baptized with water; but ye shall be baptized with the Holy Ghost not many days hence. 6 When they therefore were come together, they asked of him, saying, Lord, wilt thou at this time restore again the kingdom to Israel? 7 And he said unto them, It is not for you to know the times or the seasons, which the Father hath put in his own power. 8 But ye shall receive power, after that the Holy Ghost is come upon you: and ye shall be witnesses unto me both in Jerusalem, and in all Judaea, and in Samaria, and unto the uttermost part of the earth. 9 And when he had spoken these things, while they beheld, he was taken up; and a cloud received him out of their sight. 10 And while they looked stedfastly toward heaven as he went up, behold, two men stood by them in white apparel; 11 Which also said, Ye men of Galilee, why stand ye gazing up into heaven? this same Jesus, which is taken up from you into heaven, shall so come in like manner as ye have seen him go into heaven.

KJV Mark 16:14 Afterward he appeared unto the eleven as they sat at meat, and upbraided them with their unbelief and hardness of heart, because they believed not them which had seen him after he was risen. 15 And he said unto them, Go ye into all the world, and preach the gospel to every creature. 16 He that believeth and is baptized shall be saved; but he that believeth not shall be damned. 17 And these signs shall follow them that believe; In my name shall they cast out devils; they shall speak with new tongues; 18 They shall take up serpents; and if they drink any deadly thing, it shall not hurt them; they shall lay hands on the sick, and they shall recover. 19 So then after the Lord had spoken unto them, he was received up into heaven, and sat on the right hand of God. 20 And they went forth, and preached every where, the Lord working with them, and confirming the word with signs following. Amen.

Outline:
I. The Ending of Mark
A. Mysterious finds by the same man, Tischendorf. Vaticanus and Sinaiticus.
B. Used to undermine the traditional NT texts from the Byzantine Empire, 1100 years of Greek Christian rule. Constantinople.
C. First stage in undermining the authority of God’s Word.
D. That and the canon of the NT (books of the Bible).

II. Homiletics book.
A. Bad sermon – one that implied the Ascension actually happened.
B. This is not a liberal observance so conservative Lutherans make a point of recognizing it.
C. God accomplishes everything by His will, through His Word.
D. Doubting God means doubting His Word and His goodness. One may start at one point or another, but doubt will connect the points together. Atheists exult in the number of former ministers who fill their ranks, and these are activist haters of religion, especially the Christian faith.
E. Jesus upbraided the disciples. Important to realize that all preaching of the Word includes Law preaching – against doubting the Word.

III. We recite Psalm 47, and sing it in various hymns.
A. Did they know what they were singing? Not until it was fulfilled before their eyes.
B. God has gone up with a shout – only fulfilled in the Ascension and makes little sense apart from the Ascension.
C. Victory over sin, death, and Satan.
D. Justification by faith is essentially God declaring our sins forgiven because of Christ’s victory, and this declaration is received in faith, faith created by the Promises of God.
Posted by Ichabod the Glory Has Departed at 4:24 PM