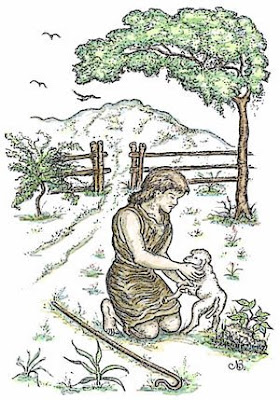 Making Friends, According to Jesus

KJV 1 Corinthians 10:6 Now these things were our examples, to the intent we should not lust after evil things, as they also lusted. 7 Neither be ye idolaters, as were some of them; as it is written, The people sat down to eat and drink, and rose up to play. 8 Neither let us commit fornication, as some of them committed, and fell in one day three and twenty thousand. 9 Neither let us tempt Christ, as some of them also tempted, and were destroyed of serpents. 10 Neither murmur ye, as some of them also murmured, and were destroyed of the destroyer. 11 Now all these things happened unto them for ensamples: and they are written for our admonition, upon whom the ends of the world are come. 12 Wherefore let him that thinketh he standeth take heed lest he fall. 13 There hath no temptation taken you but such as is common to man: but God is faithful, who will not suffer you to be tempted above that ye are able; but will with the temptation also make a way to escape, that ye may be able to bear it.

KJV Luke 16:1 And he said also unto his disciples, There was a certain rich man, which had a steward; and the same was accused unto him that he had wasted his goods. 2 And he called him, and said unto him, How is it that I hear this of thee? give an account of thy stewardship; for thou mayest be no longer steward. 3 Then the steward said within himself, What shall I do? for my lord taketh away from me the stewardship: I cannot dig; to beg I am ashamed. 4 I am resolved what to do, that, when I am put out of the stewardship, they may receive me into their houses. 5 So he called every one of his lord's debtors unto him, and said unto the first, How much owest thou unto my lord? 6 And he said, An hundred measures of oil. And he said unto him, Take thy bill, and sit down quickly, and write fifty. 7 Then said he to another, And how much owest thou? And he said, An hundred measures of wheat. And he said unto him, Take thy bill, and write fourscore. 8 And the lord commended the unjust steward, because he had done wisely: for the children of this world are in their generation wiser than the children of light. 9 And I say unto you, Make to yourselves friends of the mammon of unrighteousness; that, when ye fail, they may receive you into everlasting habitations.

Ninth Sunday After Trinity
Lord God, heavenly Father, who hast bountifully given us Thy blessing and our daily bread: We beseech Thee, preserve us from covetousness, and so quicken our hearts that we willingly share Thy blessed gifts with our needy brethren; that we may be found faithful stewards of Thy gifts, and abide in Thy grace when we shall be removed from our stewardship, and shall come before Thy judgment, through our Lord Jesus Christ, Thy Son, who liveth and reigneth with Thee and the Holy Ghost, one true God, world without end. Amen.

Making Friends, According to Jesus
Luke 16: 8 And the lord commended the unjust steward, because he had done wisely: for the children of this world are in their generation wiser than the children of light. 9 And I say unto you, Make to yourselves friends of the mammon of unrighteousness; that, when ye fail, they may receive you into everlasting habitations.

This Gospel lesson is one of those shockers, if we misunderstand it. Luther said, “It will make a lot of money for the monks and priests, if we let them.”

I like this Gospel lesson because it shows how Jesus taught. This is a passage for believers. The ordinary crowd of gawkers who wanted miracles would never understand this. In fact, there are enough unusual details to make any pastor go back and study the text.

First of all, we have the example of the unjust steward. He is presented as non-believer who is good at one thing, taking care of himself. There is a little humor in this story too.

Steward is the KJV for household manager. Since this man was very rich, he had a manager to take care of the daily needs of the estate. Things were not going well, so the rich man was ready to fire the steward. He was calling for an audit of the accounts.

This is funny – the steward knew what he was facing, so he said, “What shall I do? for my lord taketh away from me the stewardship: I cannot dig; to beg I am ashamed.” The steward was too much of an accountant to get a job doing manual labor. He was too proud to beg, so he was stymied about getting new job.

This is the part that stymies everyone at the first hearing or reading. The unjust steward went over the accounts and marked them down to make friends with the people doing business with his master.

Even more surprising, the rich man commended the steward for being so crafty.

The biggest shock is Jesus’ conclusion –

Luke 16:9 : for the children of this world are in their generation wiser than the children of light. And I say unto you, Make to yourselves friends of the mammon of unrighteousness; that, when ye fail, they may receive you into everlasting habitations.

Mammon is a Hebraic word meaning money. As Luther wrote, Mammon is having money enough for our needs and to help our neighbors.

The story does not commend the steward for being dishonest. He is good at what he does. Luther’s example is funny. “She is a flirt, and the whole world follows after her.” That is not saying – Be a flirt, but – She is a skillful flirt.

So at first the steward is in trouble for doing a bad job, but when he showed himself wily and manipulative, his rich master thought, “Now there is a guy who knows the ways of the business world.”

We should not be shocked at this. Crowds gathered to shout “Run, OJ, run” when he was trying to escape justice. Congressmen will face prison for their misdeeds and their hometowns will greet them with applause and treat them as martyrs. The same thing has happened in the Lutheran Church. If a man is questioned for his known infidelities, he is “being persecuted” and an array of officials will slime anyone who engages in this persecution. And, if a pastor is fired for not doing his job, for being a poor steward, he is admired for grabbing his job back, even if his arrogance and greed are likely to finish off his congregation. As Luther wrote, “The world loves wolf preaching.”

All this sounds so bad, so why did Jesus use a bad example to teach a lesson?

Luke 16: 8 And the lord commended the unjust steward, because he had done wisely: for the children of this world are in their generation wiser than the children of light. 9 And I say unto you, Make to yourselves friends of the mammon of unrighteousness; that, when ye fail, they may receive you into everlasting habitations.

The qualifier is important – the children in this generation. That is, in this life on earth, the unbelievers are wiser than the believers.

Some examples are all too obvious. Why would entire Lutheran denominations give themselves over to Reformed doctrine? Even worse, why would all the clergy and laity watch passively as it happened? That has been the story of all the synods in America for the last 30+ years. The participants knew what they were doing and lied about it. The rest knew it was happening and chose to be silent.

Here is an interesting example. The Seminex leader, John Tietjen, insisted on a female assistant when he was made bishop of Metro Chicago for ELCA. So they canned him. Even the Seminex supporters thought Tietjen was foolish! So they arranged for a Texas call to get him out of town and give him a living until retirement. In Texas ELCA tried to fund a big new Church Growth congregation. Tietjen, who was good at opposition, organized the ELCA pastors to oppose it. ELCA gave up and started it in Yorba Linda, California (where we are going Wednesday). That mega-church-to-be failed miserably and Tietjen looked like a wise man (for once).

Any unbeliever would say, “Why would a church spend all that money to promote the opposite of what it believes?”

An unbeliever would also ask, “Why would any church let its schools go to rot and ruin? They are the training ground for the next generation?”

In secular jobs, people are actually polite to their supervisors, even if they do not like them very much, for good reasons and bad. In the church, just the opposite in true, and people destroy their own congregations to get even with a pastor who teaches the Word and refuses to be their hired hand.
This Gospel lesson emphasizes good works, as many other passages do. Luther divided the Christian faith into two parts – our relationship to God (faith) and our relationship to our neighbor (good works). The Scriptures do not contradict themselves, so good works passages are always about the outward man (what we do) while the faith passages are about the inward man (what we believe).

There is a relationship between what we believe and what we do. Often our actions betray what we really believe.

Unrighteous mammon is money, so making friends with money means doing good things for our neighbor in need. There is the reason why our nation is overwhelmingly generous toward others, even our recent enemies. The Christian faith moves people to share with others. A disaster anywhere in the world will generate giving, not only from individuals and groups, but also from our government.

When money fails – when we are dead – our actions will be reflected in the Final Judgment. That parable emphasizes what we did here on earth, feeding, clothing, visiting. In other words, those people will stand up for us and say, “He visited me in the hospital. She sent food when we needed it. They got us past a bad time in our lives.”

Luther was fond of saying, “God has done everything for us, providing for our spiritual and material needs with great generosity. There is nothing for us to do except care for our neighbor.” That happens in sharing the Word, which occurs naturally in our daily discourse, and also in caring for our neighbors’ needs.

Posted by Ichabod the Glory Has Departed at 7:08 AM