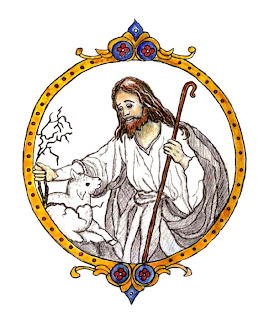 KJV 1 Corinthians 10:1 Moreover, brethren, I would not that ye should be ignorant, how that all our fathers were under the cloud, and all passed through the sea; 2 And were all baptized unto Moses in the cloud and in the sea; 3 And did all eat the same spiritual meat; 4 And did all drink the same spiritual drink: for they drank of that spiritual Rock that followed them: and that Rock was Christ. 5 But with many of them God was not well pleased: for they were overthrown in the wilderness. 6 Now these things were our examples, to the intent we should not lust after evil things, as they also lusted.

KJV Luke 16:1 And he said also unto his disciples, There was a certain rich man, which had a steward; and the same was accused unto him that he had wasted his goods. 2 And he called him, and said unto him, How is it that I hear this of thee? give an account of thy stewardship; for thou mayest be no longer steward. 3 Then the steward said within himself, What shall I do? for my lord taketh away from me the stewardship: I cannot dig; to beg I am ashamed. 4 I am resolved what to do, that, when I am put out of the stewardship, they may receive me into their houses. 5 So he called every one of his lord's debtors unto him, and said unto the first, How much owest thou unto my lord? 6 And he said, An hundred measures of oil. And he said unto him, Take thy bill, and sit down quickly, and write fifty. 7 Then said he to another, And how much owest thou? And he said, An hundred measures of wheat. And he said unto him, Take thy bill, and write fourscore. 8 And the lord commended the unjust steward, because he had done wisely: for the children of this world are in their generation wiser than the children of light. 9 And I say unto you, Make to yourselves friends of the mammon of unrighteousness; that, when ye fail, they may receive you into everlasting habitations.

Ninth Sunday After Trinity
Lord God, heavenly Father, who hast bountifully given us Thy blessing and our daily bread: We beseech Thee, preserve us from covetousness, and so quicken our hearts that we willingly share Thy blessed gifts with our needy brethren; that we may be found faithful stewards of Thy gifts, and abide in Thy grace when we shall be removed from our stewardship, and shall come before Thy judgment, through our Lord Jesus Christ, Thy Son, who liveth and reigneth with Thee and the Holy Ghost, one true God, world without end. Amen.

This parable is the strangest of all parables, but we have to look at the intentions of Jesus.

A lot of people clustered around Jesus for the benefits. Enormous crowds followed Him, but they left the moment He said something they did not like. One example is in John 6, when they said, “This is a hard saying. Who can listen to it?” And they left.

Jesus often questioned their motivation, since they liked the mass feedings and the miracles.

Therefore, the parables were designed only for believers to understand. When an unbeliever hears this parable, or if someone listens to it superficially, it is a complete puzzle.

The plot itself is rather simple. The manager of the estate has done a poor job, so he is going to be fired. To provide for himself, he goes to those who owe his master money and lowers their bills, making them his friends. We expect the master to imprison the steward for costing him money, but he commends the steward instead. If that is not confusing enough, Jesus offers the unjust steward as an example for believers – for the children of light.

How do we make sense of this – Make friends for yourself of unrighteous mammon, so that when you fail, they may receive you into the everlasting habitations?

Anyone can say, without being contradicted, that the church leaders of today have been unjust stewards of the treasures they were given. Unjust is another word for unrighteous.

The squandering of the treasure is obvious. ELCA comes to mind first, especially if someone has read the classics from the 19th and 20th centuries, all from ELCA pioneers: Reu, Jacobs, Krauth, Lenski, et al. My wife and I were talking about the congregation and pastor I worked for in Kitchener, Ontario. He was so conservative and liturgical by today’s standards that he could not get a call in most areas of WELS, Missouri, or the ELS. But, after 40 years, that same congregation is conducting homosexual weddings and already had an Anglican bishop as an interim pastor.

WELS, Missouri and the mini-micro synods want to use ELCA to make themselves look good, but they have squandered just as much, with the same speed. My first visit to a Missouri church took place in high school – a matter of curiosity for those of us who had never been to one. We met at a school gym and used the 1941 hymnal, which was very much like the one we used. At our allegedly liberal LCA congregation, youth meetings consisted of using the hymnal to learn liturgical services like Vespers and to sing Lutheran hymns. The ministers wore liturgical robes (not Geneva academic gowns) and sometimes chanted.

Now Missouri and WELS think youth gatherings should be as pagan as rock concerts. In fact, they are rock concerts and the rock n roll has moved into the Sunday service itself.

Thus far the parable. The wealth has been squandered. In the Bible, wealth is primarily the spiritual treasures of the Gospel, since money is a small matter to God.

The spiritual treasures have been squandered to such an extent that frauds either promote Roman Catholic or Fuller doctrine and call themselves “confessional Lutherans.” My Shelties know more about Lutheran doctrine than the DPs and seminary professors, so the frauds all promote one another and praise one another, world without end, Amen.

So what should we do, according to the parable? Even a bad, lazy, crooked steward knows what to do. He makes friends with that same mammon (money) he has squandered. He was foolish before but now he is wise. They will take him in when he is fired from his stewardship, because he has befriended them.

Jewish reasoning is often from the minor to the major. In other words, if this bad steward can figure it out, so should the believers – but they are often foolish.

Jesus never said, “Be crooked and wily.” He said, “Be as wise as serpents and as innocent as doves.”

So, if an unjust steward can figure this out, why not follow him in his cleverness?

People long for the power and money of the established churches. But what they do have is far more powerful. They have the free use of the Word and many ways to spread that Word of God for free.

A few people have noticed that it is possible to communicate with 20,000 people for free, all over the world, when others spend millions to do the same thing.

This is one way to make friends in the best sense, to unite people according to their faith in the Word of God.

It is strange that everything gets turned upside down. Money itself has only short-term use and has no eternal value. The treasure of the Gospel is a blessing now and in eternity.

When we help people out, we often complain, “We did not get any thanks for it or even a returned favor.” That is really a barter situation, not a gift. If I get a returned favor or thanks, I am not truly giving something away, whether it is my time or something with monetary value.

This parable teaches, “Make friends with money and they will speak for you when you get to heaven.” (Luther) I see this as encouragement to think of those who receive from us as our defense lawyers when we reach Judgment Day. The New Testament has an odd way of balancing faith alone and those good works which follow faith. The good works are a visible testimony to our faith. They do not add to, do not complete faith (as the papalists teach). It is a matter of order.

The situation will be reversed in many cases. There will those who reach Judgment Day who have been honored by the visible church for funding all their buildings. But if they broke up their own families and others, if they lied and cheated people through life, will God be impressed with their honorary doctorate from Fleabit College? Who will speak for them? The apostate church leaders will already be on slow roast.

The early Christians took note of the advice given by Jesus. They had nothing and were nothing, but they spread the Gospel throughout the world. They used hospitality the way we use the Internet today. They had secret signals, like the fish. Deprived of great marble temples, they used the tombs below ground. Persecuted, they took the Gospel to new places. Imprisoned, they preached to their jailers (see Acts) and baptized them. Slain, they died in peace in front of raging beasts, shaking pagan Rome to The CORE.

Posted by Ichabod the Glory Has Departed at 6:53 AM

Great sermon. I'm in a Missouri Synod Church. Thankfully it is confessional, but many of the members are complacent and fall into the pagan trap. They are not keeping their children away from youth gatherings that are basically rock concerts. Those kids and youth get all hyped up and it's not for Jesus. It's for the opposite sex and all the wrong reasons. I'm not an old traditionalist. I'm only 35, but I've witnessed these things. Thanks again for your sermon.