The Festival of the Reformation, 2012

The Antichrist Opposes the Gospel

KJV Matthew 11:12 And from the days of John the Baptist until now the kingdom of heaven suffereth violence, and the violent take it by force. 13 For all the prophets and the law prophesied until John. 14 And if ye will receive it, this is Elias, which was for to come. 15 He that hath ears to hear, let him hear.

Collect
O almighty, eternal God: We confess that we are poor sinners and cannot answer one of a thousand, when Thou contendest with us; but with all our hearts we thank Thee, that Thou hast taken all our guilt from us and laid it upon Thy dear Son Jesus Christ, and made Him to atone for it: We pray Thee graciously to sustain us in faith, and so to govern us by Thy Holy Spirit, that we may live according to Thy will, in neighborly love, service, and helpfulness, and not give way to wrath or revenge, that we may not incur Thy wrath, but always find in Thee a gracious Father, through Jesus Christ our Lord, who liveth and reigneth with Thee and the Holy Ghost, one true God, world without end. Amen. 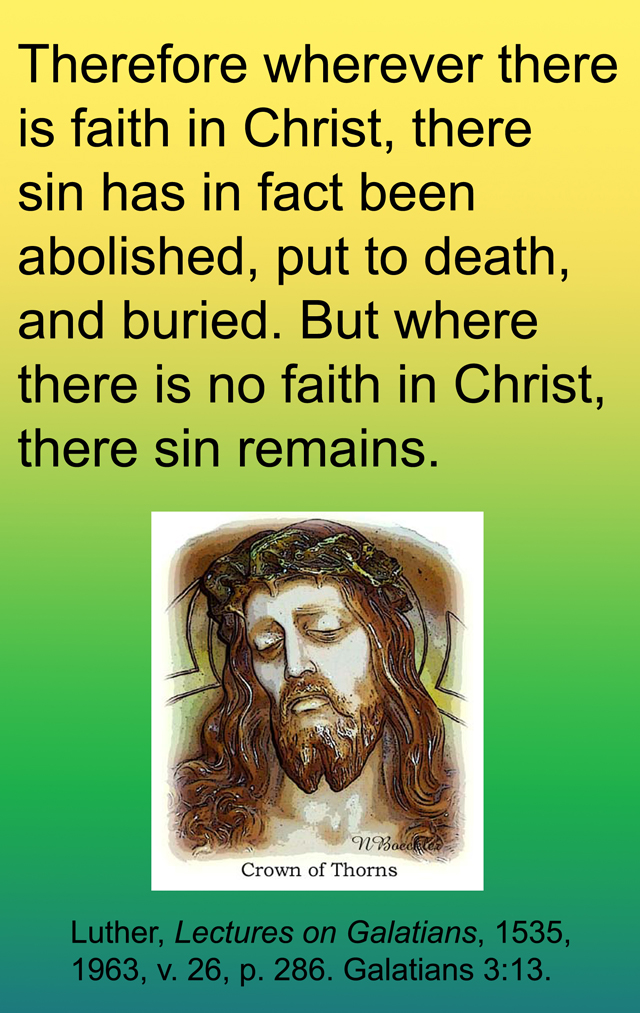 The Antichrist Opposes the Gospel

The Reformation really began about 100 years before Luther, when various figures in Europe began to place the Word of God above that of the church authorities. For that reason, the new teachers from within the Church (there was only one) began to preach against corruption, immorality, and the selling of indulgences, forgiveness bought from the pope with money and various other acts.

Those who attended the Council of Constance and participated in these murders were awarded an indulgence.

An indulgence may be called forgiveness, but it not quite that. An indulgence is only a partial reprieve, because the teaching of Purgatory means the most saintly nuns and monks will still be in that imaginary place of torment for hundreds of years. An indulgence removes some of that time, but not all of it. The papacy found that extending one’s fear of Purgatory, a mini-hell for the semi-saved, was useful in raising funds to endow churches and keep the prelates well fed.

Indulgences continue today in the Roman Catholic Church. The Church of Rome prints a book on indulgences so the faithful can see what sacrifices reduce how many days or years in Purgatory. At Notre Dame a notice was put up, when I was there, about watching the Pope on TV – the viewing was worth so many days off Purgatory. 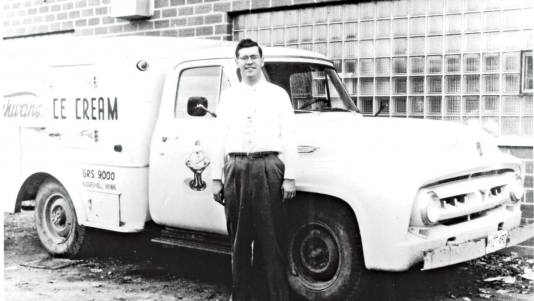 Nominal Lutherans also have indulgence sales. If a wealthy adulterer feels guilty about his sins, he can give large amounts of money through Planned Giving Counselors (who have insurance licenses and get a commission). Once the money is received the donor is praised to high heaven and held up as an example. Church institutions are still selling forgiveness – and kind of grace is not cheap grace. It costs millions of dollars. Therefore, money is the Means of Grace for the sinner, so it is natural that the institutions also think money (not the Word) is their salvation. If only they had more!

For Huss, the cost for this preaching and teaching was his life. We joke about burning someone at the stake, but that was the price paid throughout the Reformation. The Church of Rome used its power to arrest, threaten, and torture people. They needed to silence anyone who said, “This is the Word of God, but the Church teaches against it. The Gospel is free, but the Church is demanding works. The Gospel gives complete forgiveness, but the Church is teaching partial, limited, and works-forgiveness.”

To save their lives, all the clergy had to do was silence themselves. They could think whatever they wanted, as long as they did not teach the truth. Of course, that meant they had to go along with what was wrong according to the Word.

That was a stark reminder of the material power. The faithful did not remain in their church situations but ended up in horrid prisons. They could not stay in any kind of position at all. They faced an end so terrible that prisoners bribed the executioners to make the fire take action quickly rather than slowly.

They also faced ignominy and shame. How could they be right when the stinking crowds gathered and cheered their deaths? When their former friends shunned them or begged them to recant?

Luther assumed for years that he would be executed for his teaching. Just for comparison – he posted the Theses in 1517, had to be kidnapped and be considered dead to save his life, and still had to stay away from the Diet of Augsburg in 1530. How many would want to spend 13 years under the threat of execution?

That also meant that Melanchthon and the Protestant leaders who met with the Emperor were under the threat of execution. By God’s providence, the Emperor needed Luther’s ruler, the Elector, to keep him in office. The Elector was called that because he was part of electing the Holy Roman Emperor, Charles V, a Spaniard who loathed the Reformation.
Huss’ motto was “Truth prevails,” and Luther taught, “The Word of God is truth.”

Lutherans identify Luther with the angel.

KJV Revelation 14:6 And I saw another angel fly in the midst of heaven, having the everlasting gospel to preach unto them that dwell on the earth, and to every nation, and kindred, and tongue, and people,

An angel, in Hebrew and Greek, is a messenger. He does not bring his own word, but only God’s Word. The Biblical angel has no other task than to do exactly what God has commanded and convey God’s will accordingly.

When an angel spoke in the Scriptures, it was not another opinion or a new opinion, but God’s will and Word.

So there is only one Truth, and we have an exact measure of that truth – the Scriptures. To confess the truth, we must not only teach that truth but separate truth from error. If one thing is true, then all variations must be false.

The spirit of compromise is the spirit of the Antichrist. The Gospel can be used to talk about forgiveness, but taught to manipulate, condemn, and deceive. When people are indifferent, they are joining the Antichrist as little antichrists (the plural is also used in the New Testament).

Anti is seen as meaning opposition, but it is more accurate to see that prefix and meaning a replacement.

That has been carried forward to the priesthood, which has only magnified the corruption of that office. 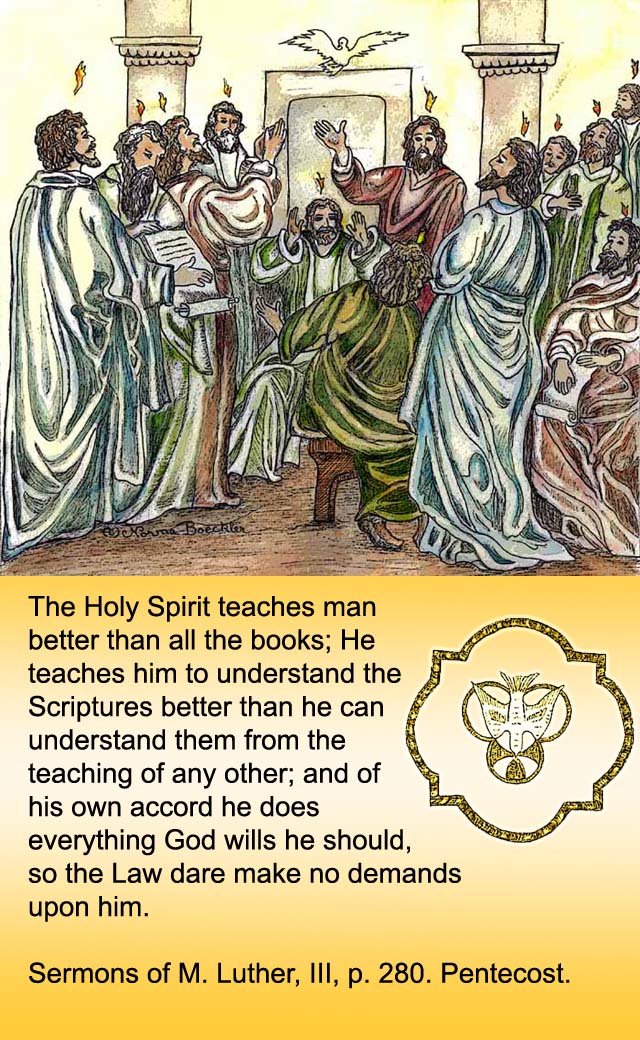 The everlasting Gospel is faith in Christ, without excuses or modifications. The moment we believe in Christ, our sins are forgiven, taken away, forgotten by God. Which sins – the great and terrible sins, the multitude of sins, the sins we cannot conquer (Luther, Galatians Commentary).
And the moment we are justified by faith, declared forgiven through faith in Him, our life of good works begins.

The only threat to this is being removed from the Means of Grace  - the Word and Sacraments. Many remove themselves through indifference – especially the clergy. They stop believing it matters, as long as they are comfortable. Others remove themselves by falling into various doctrinal errors, one mistake leading to another.

So the baby baptized is in the Kingdom of God, forgiven of his sins, and doing good works that glorify God. How does that happen? We see that in the way children relate to each other and love each other when raised in the Christian faith. One older sister learned that by pretending to cry she could get baby sister to give her the toy – a bit devious, but it showed the generosity of the baby.

We overlooked all that and took it for granted until this Age of Barbarism took over. Now we read about terrible crimes by children, by parents of children, by groups of teens, and we think of horror movies – but this is America. Now we know what it means to remove the Christian faith from our culture, the family from our social structure. 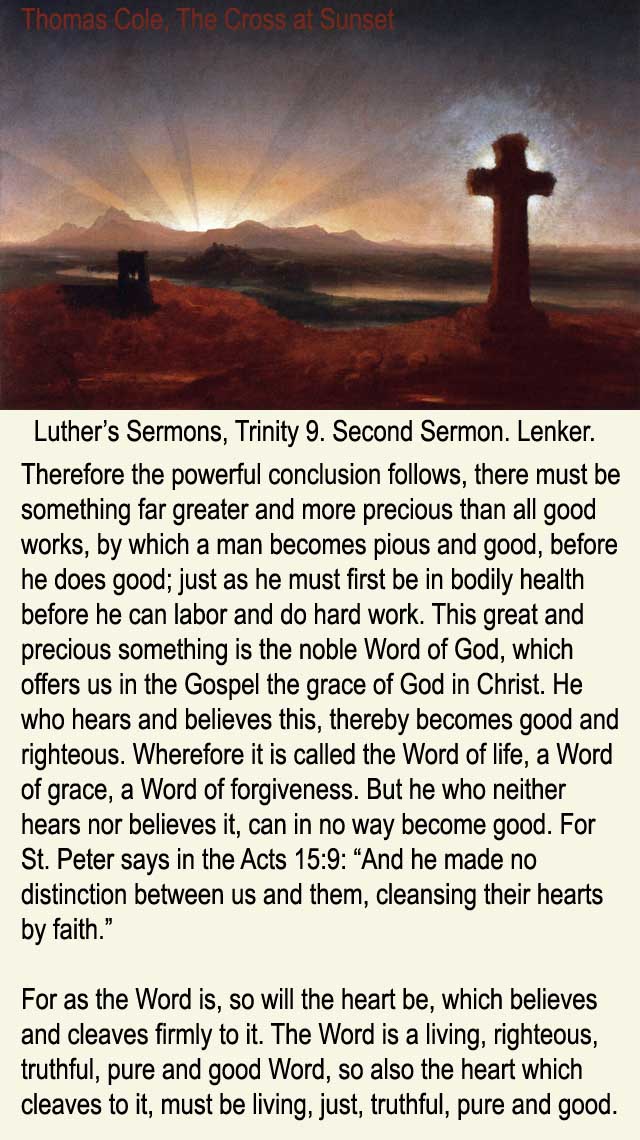 To preach unto them

Preaching means proclaiming, the herald or town crier. Many newspapers have been called Herald because that was an office in the pre-print world. A town crier or herald went through the town and gave the official announcements. Like the angel of the Bible, he did not make up the message, but gave what he was told to proclaim.

The proclamation must be correct and in harmony with God’s Word, with no deviation.

For 200 years the rationalistic mainline churches have proclaimed that everyone on earth is forgiven, because of God’s grace. They add works to that in the form of social activism and other demands of the law.

Nominal Lutherans modified that a bit but offered the same mainline message – everyone is forgiven, absolved, and saved, based on God’s grace. They are doing just as well as the rest of the mainline groups – they are fading away fast. It is really  a convenient message of indifference from the little antichrists.

But the Bible always emphasizes faith in Christ. The proclamation is that Christ has paid the terrible price for all the sins of the world, and has become sin itself. That Gospel message produces and maintains faith in Him – faith receiving this forgiveness won through the battle Christ won against sin, death, and Satan. 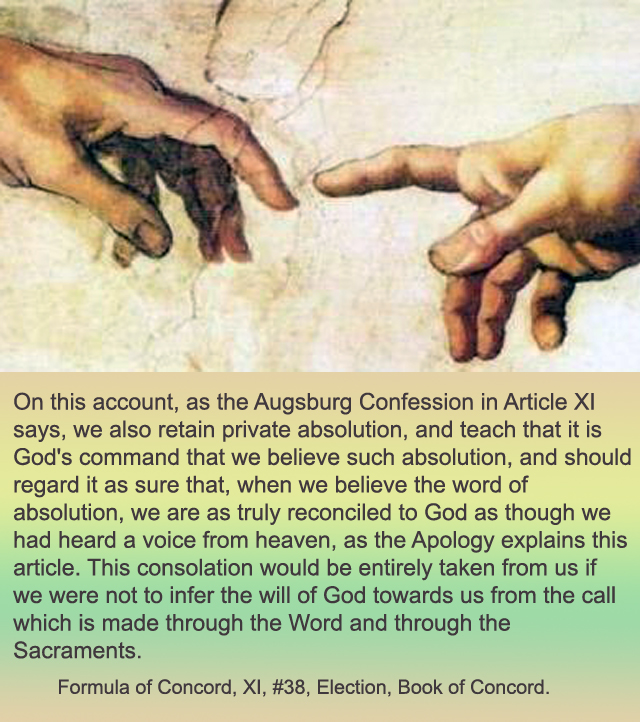 Posted by Ichabod the Glory Has Departed at 7:20 AM