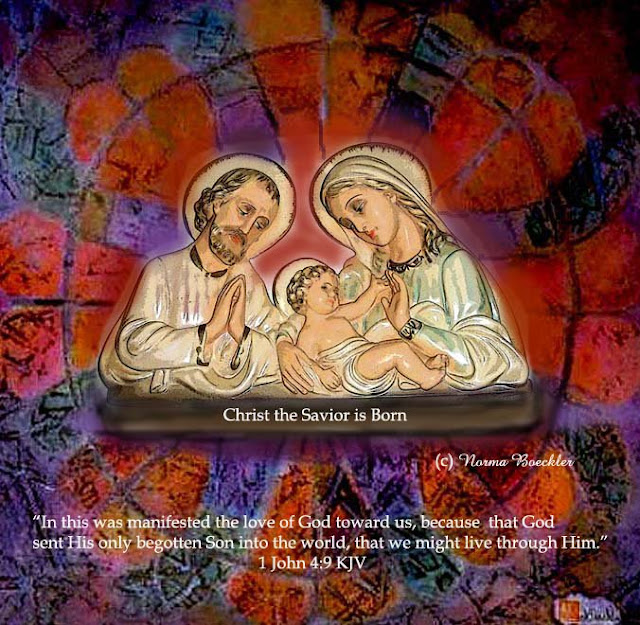 The Word of God Incarnate, by Norma Boeckler.

KJV Romans 5:1 Therefore being justified by faith, we have peace with God through our Lord Jesus Christ: 2 By whom also we have access by faith into this grace wherein we stand, and rejoice in hope of the glory of God. 3 And not only so, but we glory in tribulations also: knowing that tribulation worketh patience; 4 And patience, experience; and experience, hope: 5 And hope maketh not ashamed; because the love of God is shed abroad in our hearts by the Holy Ghost which is given unto us. 6 For when we were yet without strength, in due time Christ died for the ungodly. 7 For scarcely for a righteous man will one die: yet peradventure for a good man some would even dare to die. 8 But God commendeth his love toward us, in that, while we were yet sinners, Christ died for us.

KJV John 3:13 And no man hath ascended up to heaven, but he that came down from heaven, even the Son of man which is in heaven. 14 And as Moses lifted up the serpent in the wilderness, even so must the Son of man be lifted up: 15 That whosoever believeth in him should not perish, but have eternal life. 16 For God so loved the world, that he gave his only begotten Son, that whosoever believeth in him should not perish, but have everlasting life. 17 For God sent not his Son into the world to condemn the world; but that the world through him might be saved. 18 He that believeth on him is not condemned: but he that believeth not is condemned already, because he hath not believed in the name of the only begotten Son of God. 19 And this is the condemnation, that light is come into the world, and men loved darkness rather than light, because their deeds were evil. 20 For every one that doeth evil hateth the light, neither cometh to the light, lest his deeds should be reproved. 21 But he that doeth truth cometh to the light, that his deeds may be made manifest, that they are wrought in God.

We call John 3:16 the Little Gospel because the entire message of the Bible is summed up in one verse. That by itself should tell us a lot about that message.

Luther said we should write John 3:16 in golden letters on our hearts. Most children who have believing parents will learn this verse and know it better than any other.

I am sure that most adults will say that no other verse is quite so clear and so comforting as this one verse.

First we should observe the continuity between the Old and New Testament in this famous passage.

The sermon takes us back to Moses and the Exodus, the strange miracle of rescuing the people from poisonous serpents by raising up a bronze figure of a snake.

KJV Numbers 21:8 And the LORD said unto Moses, Make thee a fiery serpent, and set it upon a pole: and it shall come to pass, that every one that is bitten, when he looketh upon it, shall live. 9 And Moses made a serpent of brass, and put it upon a pole, and it came to pass, that if a serpent had bitten any man, when he beheld the serpent of brass, he lived.

Everything in the Old Testament was a prelude to the New Testament, with many Gospel passages throughout the Law and the Prophets.

The Gospel of John is the fulfillment of all those figures found in the Exodus: the water flowing from the rock, the bread of life from heaven, and the bronze snake raised up.

Everyone knew the story of the bronze serpent being lifted up. Jesus said he would be lifted up in a similar way, only He would give life and salvation to everyone who believed.

When we think of it, this comparison is quite odd and nothing we would ever consider or invent, but Jesus used it himself.

According to God’s Word, healing came from looking upon this bronze serpent. Therefore, it was a type of early sacrament. We find many of them in the Old Testament.

The rainbow is a physical reminder of God’s promise not to flood the entire earth again.

Circumcision is the covenant.

All the features of worship were tied up with physical objects people could see and touch.

The priests did not wear Hawaiian shirts and jeans (or the Semitic equivalent) but elaborate robes.

Blood sacrifice, for centuries, prepared people for the sacrifice of the innocent Lamb of God.

The reason why many Jews become Christians is the perfect fulfillment of the Old Testament found in the New Testament. The more one knows Judaism, the more one understands liturgical worship, appointed lessons, and the hundreds of ways Jesus fulfilled all the OT promises.

Every aspect of OT worship pointed toward Christ. And still does.

How would we summarize the message of the entire Old Testament, the foundation of presenting Christ as it does?

The Old Testament says – Everything comes through God’s Word, from Creation to the strangest little miracle (the fleece, for example).

That is it, in three words. The Ten Commandments are His Word. Trust that they are good commandments, intended for the best.

The blessings in the OT – they are all real. Trust in them, too.

And trust that all the promises about the Messiah are completely true and will come to pass.

The OT teaches faith in the Word.

The Little Gospel teaches faith in the Incarnate Word. Jesus Himself is all the Promises of the OT brought together and fulfilled. Everything happens through Him alone.
Jesus is not 1/3 of God, for the fullness of the Godhead dwelt in Him. God chose to give to the Son that special role in dying on the cross and rising from the dead.

People try to figure these things out and fail, because they are mysteries revealed by the Holy Spirit.

John 3:16 answers the one question of all religion, but the difference is – this is the only correct answers. All other answers are wrong because they vary from this or are completely opposed to it.

The answer is so simple that only a child-like faith can grasp it. Whoever believes in Christ will not die but have everlasting life – that is God’s love for the whole world, that He graciously gives salvation to all those who trust in the atoning death of His beloved Son.

The message of the NT is the same as the message of the OT – trust in the Word. The difference is that the implications of all the OT promises became realized in Jesus, the Word of God Incarnate.
Posted by Ichabod the Glory Has Departed at 4:30 PM