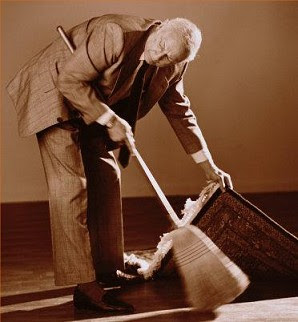 Church and Chicanery: "Let's just sweep this under the rug."

As I went on to research The Willow Creek Association, I discovered that thousands upon thousands of established churches around the country were being transformed into sensory driven "seeker churches" EXACTLY like ours under the guidance and direction of this organization, all with the same tolerance, diversity and unity theme, liberal worship format, scripturally shallow teaching, heavy on the comfort and light on the conscience, equipped with huge multi-media projection screens, large sound systems, exotic music, no choir, female ministers, feelings-motivated skits, dance interpretations and heavily burdened with millions of dollars of debt from building state-of-the-art entertainment venues they call "worship centers". I think the revolving disco ball sparkling overhead at our dedication service a couple of years ago was a REAL poignant moment for me personally.

I have long-since worn out my welcome with certain members of the church staff by repeatedly protesting our involvement in these ecumenical movements and carnal extravaganzas beginning with the "men's movement"; that emotionally driven, highly advertised, celebrity endorsed, spiritually misguided and now financially bankrupt organization known as "Promise Keepers". The "Consensus Process" or "Hegelian Dialectic" teaches "facilitators" to isolate, intimidate and even shame their critics into silence and cooperation with "hurt feelings" as their license and authority. This too is carnal. Those seeking group acceptance and approval are powerless against it. Frankly, I'd much rather have God's acceptance and approval than the herd's. You see The Willow Creek Association always emphasizes "felt needs", unity, harmony, peace and human relationships over everything else...Just like the United Nations. But, that's not the Gospel.

"Consensus" is all about compromising toward "group-think" not God think. It is conformity to the collective through peer-pressure. This is the very heart of the heresy.

GJ - Go to Trapp's WELS congregation and Parlow's - and find the same doctrinal ID, along with heavy debt.

Both of them joined the Willow Creek Association, but Trapp desisted at some point. Nevertheless, Trapp transformed the congregation into a Willow Creek clone.

This corruption is far more extensive in WELS than most people realize. The Little Sect on the Prairie has its echo version, and Missouri is rife with it. McCain-Barry had nine years to rebuke the false doctrine of CGM and did nothing at all.
Posted by Ichabod the Glory Has Departed at 6:30 AM