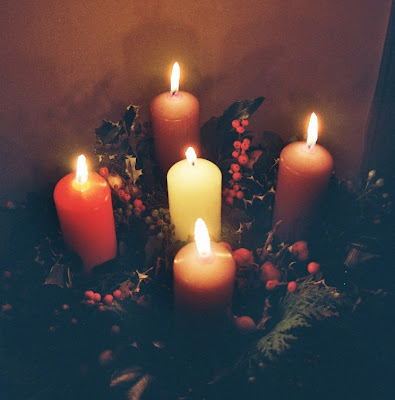 
The Week 4 service will be Christmas Eve 7 PM, Holy Communion.

The Sermon Hymn #58 Gerhardt iv.49
The Sermon
A Virgin Will Conceive
The Prayers
The Lord’s Prayer
The Collect for Grace p. 45

KJV Isaiah 7:10 Moreover the LORD spake again unto Ahaz, saying, 11 Ask thee a sign of the LORD thy God; ask it either in the depth, or in the height above. 12 But Ahaz said, I will not ask, neither will I tempt the LORD. 13 And he said, Hear ye now, O house of David; Is it a small thing for you to weary men, but will ye weary my God also? 14 Therefore the Lord himself shall give you a sign; Behold, a virgin shall conceive, and bear a son, and shall call his name Immanuel. 15 Butter and honey shall he eat, that he may know to refuse the evil, and choose the good. 16 For before the child shall know to refuse the evil, and choose the good, the land that thou abhorrest shall be forsaken of both her kings. 17 The LORD shall bring upon thee, and upon thy people, and upon thy father's house, days that have not come, from the day that Ephraim departed from Judah; even the king of Assyria.

KJV Isaiah 9:2 The people that walked in darkness have seen a great light: they that dwell in the land of the shadow of death, upon them hath the light shined. 3 Thou hast multiplied the nation, and not increased the joy: they joy before thee according to the joy in harvest, and as men rejoice when they divide the spoil. 4 For thou hast broken the yoke of his burden, and the staff of his shoulder, the rod of his oppressor, as in the day of Midian. 5 For every battle of the warrior is with confused noise, and garments rolled in blood; but this shall be with burning and fuel of fire. 6 For unto us a child is born, unto us a son is given: and the government shall be upon his shoulder: and his name shall be called Wonderful, Counsellor, The mighty God, The everlasting Father, The Prince of Peace. 7 Of the increase of his government and peace there shall be no end, upon the throne of David, and upon his kingdom, to order it, and to establish it with judgment and with justice from henceforth even for ever. The zeal of the LORD of hosts will perform this.

A Virgin Will Conceive

The decline of Christianity in America began in earnest when so-called Biblical scholars denied the Virgin Birth of Christ. They were really saying they did not believe in the divine nature of Christ. They expressed this by taking a position against Christian teaching, although they still wanted to be paid as Christian theologians. Believe it or not, this was already happening at Yale in the 1920s.

Many laymen have asked, “If Jesus is not divine, then what is left of Christianity?”
The skeptics within are those who have lost faith in God but want the comfort of some kind of religion. I told a Jewish friend that the Unitarians were people who believed in nothing but still wanted to have a church. That made her angry – until she went to a Unitarian meeting and found out I was right. She was also surprised to learn that Reformed rabbis do not believe in anything they discuss during the Passover. My prediction about that made her angry too, but she checked out the facts and came back to tell me I was right. One reason there are so many attacks on the faith from within is the refusal to accept it is happening.

The Virgin Birth of Christ is clearly taught in the Scriptures, starting with Genesis 3:15. The First Gospel may not have resonated with everyone at first, but in retrospect we can see how clear it was.

Genesis 3:15 And I will put enmity between thee and the woman, and between thy seed and her seed; it shall bruise thy head, and thou shalt bruise his heel.

Luther pointed out that Satan pursued Israel from the beginning, search for a way to destroy the promised Messiah. “Nothing was left but a stump” when Jesus was born. I never thought of it that way. Every evil fell upon Israel, a nation split and conquered and in bondage to Rome at the beginning of the new era.

The crucifixion is predicted in Genesis 3:15. Satan will wound the woman’s seed (not the man’s) and this Seed will wound Satan. God’s curse against the serpent is the Promise of the Messiah, the First Gospel.

The Messianic Promise stems from a disaster caused by the freedom given to man.

The Virgin Birth prophecy is similar. King Ahaz was told to ask anything of God, but he refused in a self-righteous way. God commanded the request – He did not suggest it. When Ahaz refused to ask for a miracle (a sign), God gave him one anyway. The context makes it clear that this is a special miracle, not the prediction that a young woman will give birth. “Behold” emphasizes the miracle.

Isaiah 7:14 Therefore the Lord himself shall give you a sign; Behold, a virgin shall conceive, and bear a son, and shall call his name Immanuel.

One of the strange twists in church history is that a long conflict about the Two Natures of Christ ended with the Council of Ephesus, where Mary was called Theotokos – Godbearer, to clarify the Two Natures of Christ. That was the issue.
After that, a cult of Mary grew and dominated the next thousand years. Mary displaced Christ in the teaching of the Middle Ages. Today one of the surest signs of a Lutheran pastor going haywire is his obsession with Mary.

The passage in Isaiah 9 explains the Virgin Birth even more:

Isaiah 9: 6 For unto us a child is born, unto us a son is given: and the government shall be upon his shoulder: and his name shall be called Wonderful, Counsellor, The mighty God, The everlasting Father, The Prince of Peace. 7 Of the increase of his government and peace there shall be no end, upon the throne of David, and upon his kingdom, to order it, and to establish it with judgment and with justice from henceforth even for ever. The zeal of the LORD of hosts will perform this.

Once again the Messiah is called God. There is no end to the increase of His government. That is still true today. Starting with 12 apostles, Jesus established a world-wide religion which continues to spread through the Word. No other government has continued to grow. The Roman Empire seemed eternal when Jesus was born, in the reign of Caesar Augustus. In a few centuries the Western Roman Empire was gone. Another 1000 years later, the Eastern Roman Empire (Constantinople) also fell. Hitler’s thousand-year Reich lasted 12 years.

Genesis 3:15 And I will put enmity between thee and the woman, and between thy seed and her seed; it shall bruise thy head, and thou shalt bruise his heel.

Luther’s comment – Satan did not know who the woman would be and pursued Israel until nothing was left but a stump.

Isaiah 7:14 Therefore the Lord himself shall give you a sign; Behold, a virgin shall conceive, and bear a son, and shall call his name Immanuel.

Genesis 24:43 Behold, I stand by the well of water; and it shall come to pass, that when the virgin cometh forth to draw water, and I say to her, Give me, I pray thee, a little water of thy pitcher to drink;

Exodus 2:8 And Pharaoh's daughter said to her, Go. And the maid went and called the child's mother.

Matthew 1:23 Behold, a virgin shall be with child, and shall bring forth a son, and they shall call his name Emmanuel, which being interpreted is, God with us.

Luke 1:27 To a virgin espoused to a man whose name was Joseph, of the house of David; and the virgin's name was Mary.

Luke 1:34 Then said Mary unto the angel, How shall this be, seeing I know not a man?

Micah 5:2 But thou, Bethlehem Ephratah, though thou be little among the thousands of Judah, yet out of thee shall he come forth unto me that is to be ruler in Israel; whose goings forth have been from of old, from everlasting. 3 Therefore will he give them up, until the time that she which travaileth hath brought forth: then the remnant of his brethren shall return unto the children of Israel. 4 And he shall stand and feed in the strength of the LORD, in the majesty of the name of the LORD his God; and they shall abide: for now shall he be great unto the ends of the earth.

Exodus 40:34 Then a cloud covered the tent of the congregation, and the glory of the LORD filled the tabernacle.

Luke 1:35 And the angel answered and said unto her, The Holy Ghost shall come upon thee, and the power of the Highest shall overshdow thee: therefore also that holy thing which shall be born of thee shall be called the Son of God.


Matthew 17:5 While he yet spake, behold, a bright cloud overshadowed them: and behold a voice out of the cloud, which said, This is my beloved Son, in whom I am well pleased; hear ye him.

1 Peter 1:10 Of which salvation the prophets have enquired and searched diligently, who prophesied of the grace that should come unto you 11 Searching what, or what manner of time the Spirit of Christ which was in them did signify, when it testified beforehand the sufferings of Christ, and the glory that should follow. 12 Unto whom it was revealed, that not unto themselves, but unto us they did minister the things, which are now reported unto you by them that have preached the gospel unto you with the Holy Ghost sent down from heaven; which things the angels desire to look into.

Posted by Ichabod the Glory Has Departed at 5:21 PM